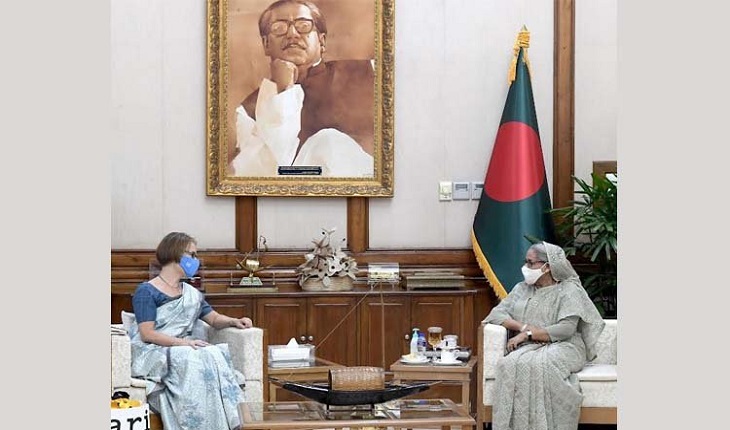 "We will continue to support Bangladesh on the Rohingya issue," she said.

During the meeting, Sheikh Hasina said Rohingyas were sheltered in Bangladesh on humanitarian ground, but they (Rohingya) are now creating social problem.

The premier said," The Rohingyas should return to their country."

Referring to a resolution adopted by the Association of Southeast Asian Nations (ASEAN) on Rohingya issue, the prime minister said, “The ASEAN has sent a good message to Myanmar through adopting the resolution”.

Sheikh Hasina said that the non-government organisation (NGO)'s which are working in Bangladesh can do their parts for the Rohingyas in their homeland.

During the meeting, they have also discussed the COVID-19, climate change and women empowerment.

About women empowerment, the prime minister said that women participation was ensured in every government jobs particularly in the armed forces and Border Guard Bangladesh (BGB) and in the socio-political arena.

On climate issue, Sheikh Hasina, also President of the ruling Awami League said that her party and its associate bodies have been conducting a campaign of planting trees in large number alongside the government to protect environment.

Mia Seppo expressed her satisfaction over her stay in Bangladesh saying that she had a very good collaboration with the government.