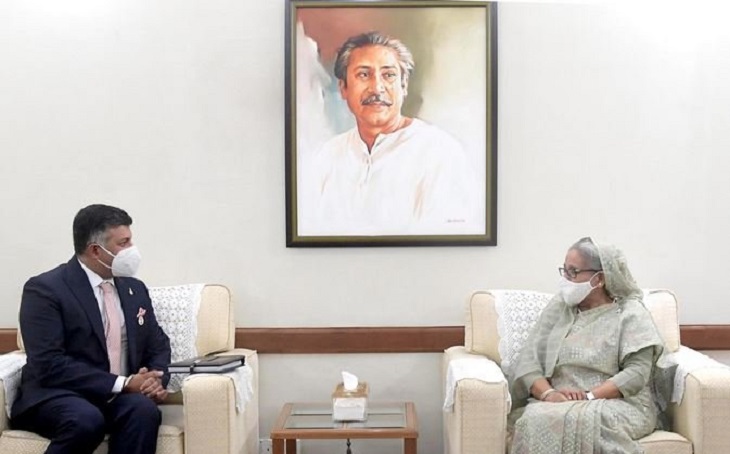 Stressing the need for enhancing connectivity between Bangladesh and India to boost bilateral trade and commerce, Prime Minister Sheikh Hasina today said the rail communication on Akhaura-Agartala route should be reopened.

"We have to enhance the connectivity. Everything (required establishment) of Akhaura-Agartala rail route remains there. It just will have to reopen," she said.

The trade and communication will be fostered as the connectivity increases between the neighbouring countries, she said.

The prime minister said this while Indian high commissioner here Vikram Kumar Doraiswami called on her at her official Ganabhaban residence in capital.

Sheikh Hasina said the relations between Bangladesh and India has reached a new height.

She said significant progress has taken place in trade, business and tourism sectors between the countries.

Doraiswami informed the premier that Indian president will visit Bangladesh to join the Victory Day celebration marking the birth centenary of Father of the Nation Bangabandhu Sheikh Mujibur Rahman and Golden Jubilee of the Independence.

Doraiswami also said, "This is a special year and it has a great significance that Indian president and prime minister is visiting Bangladesh in the same year."

He added that Bangladesh is a very dear country for India.

The envoy said they will showcase the relations of Bangladesh and India to demonstrate a good framework of their connection.

He said officials of the countries are currently working to finalise the tour of Indian President.

About Covid-19, the prime minister said that both the countries have to remain cautious to tackle the deadly virus.

The Indian high commissioner thanked the Bangladesh premier for helping his country by providing medical equipment during their bad time in fighting Covid-19.

He handed over a very rare photograph of Father of the Nation Bangabandhu Sheikh Mujibur Rahman taken in 1972 where he was seen taking one security person to his home for having lunch with him.

He also handed over a pen drive comprising some audios and videos alongside some newspaper clippings.

The premier recalled her horrible days under the captivity of the Pakistani occupation forces in December 1971.

But when India recognised Bangladesh as a sovereign independent country it was great message for them, she said.

Int’l standard vaccine institute to be set up in country, PM tells JS