Sir Jonathan Miller, the distinguished theatre and opera director who famously starred in the Beyond the Fringe satirical revue, has died aged 85.

In a statement, his family said he had died "peacefully at home... following a long battle with Alzheimer's".

A man of many parts, Miller was also an author, a photographer, a sculptor, a broadcaster and a qualified doctor.

Born in London in 1934, Miller studied medicine at Cambridge before embarking on a career in the arts.

The catalyst was Beyond the Fringe, in which he appeared with Peter Cook, Dudley Moore and Alan Bennett.

The groundbreaking revue premiered at the 1960 Edinburgh Festival before transferring to the West End and Broadway.

Its success led to Miller becoming editor and presenter of BBC arts programme Monitor and a director of plays at the National Theatre. 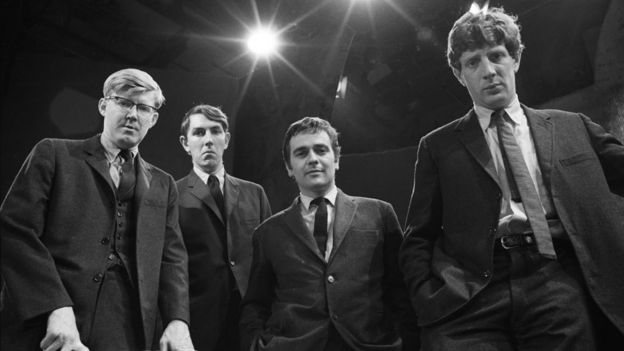 His productions included a modern-dress staging of The Merchant of Venice, with Laurence Olivier as Shylock.

He went on to direct six of the BBC's 1980s Shakespeare productions, among them The Taming of the Shrew with John Cleese and Othello with Anthony Hopkins.

He served as artistic director of London's Old Vic theatre from 1987-90. Despite being unable to read music, he also directed operas for the ENO, Glyndebourne and the Met in New York. Who's Who listed his only recreation as "deep sleep".

In a tribute, the Royal Opera House's director of opera Oliver Mears said Miller was "one of the most important figures in British theatre and opera of the past half century".

He continued: "Combining a supreme intellect with a consistently irreverent perspective, formed from his experiences in both comedy and medicine, Miller shone a unique light on our art form.

"His intolerance of inauthenticity and laziness on stage was matched by the urgency and rigour of his search for the composer's vision, historical accuracy and psychological truth - resulting in so many productions which have stood the test of time."

The English National Opera added on Twitter: "His contribution to comedy, theatre and ENO in particular was immeasurable. For over four decades Jonathan created some of ENO's most celebrated and popular opera productions."

And the National Theatre described him as "a legendary figure across theatre and opera".

Miller, who was knighted in 2002 for services to music and the arts, was witty and erudite but could be cantankerous.

"I've got this, I think, unjustified reputation for being grumpy," he once said, insisting he only objected to "people who are 30 years younger than I am and know 100% less than I do".

Tony Hall, the BBC's director general, said Miller was "a creative genius whose imagination knew no bounds... he brought arts and culture to millions on the BBC".

He was also remembered by BBC Radio 3 broadcaster Petroc Trelawny as "a polymath and cultural giant" whose "contribution to British cultural life was as varied as it was vast".