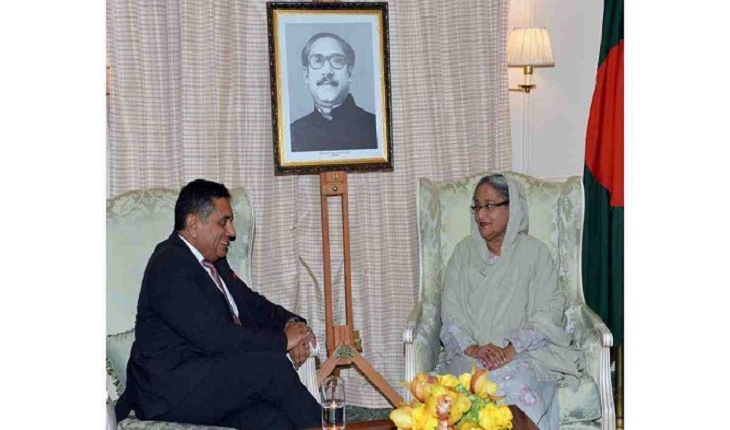 The United Kingdom (UK) has appreciated Prime Minister Sheikh Hasina’s enduring leadership in tackling climate change, both domestically and on the international stage.

"Bangladesh’s leadership on resilience was clearly demonstrated in the early warning and evacuation of millions of people from the path of super Cyclone Amphan (um-pan) in May," said British Minister of State for Foreign, Commonwealth & Development Affairs Lord Ahmad of Wimbledon.

While addressing at the virtual Climate Vulnerable Forum Leaders’ event on Wednesday evening Chaired by Sheikh Hasina, Lord Ahmad said the event is testimony to Prime Minister Hasina’s enduring leadership in tackling climate change, both domestically and on the international stage.
On behalf of the United Kingdom, he thanked Bangladesh and the CVF for their leadership on this journey.
The opening of the regional office of the Global Centre on Adaptation in Dhaka further cements the role Bangladesh can play in sharing expertise across the region and accelerating progress, he said.

"Bangladeshi Prime Minister Sheikh Hasina and I believe that everyone, everywhere, needs to increase their COP26 Ambition to help countries adapt and build resilience, as we discussed at the Climate Vulnerable Forum(CVF) summit," said Lord Ahmad.

"Together we can agree an ambitious, shared plan of action at COP26. The whole world is literally depending on us to make significant and faster progress," said the British Minister of State.

He expressed satisfaction to see the work the Climate Vulnerable Forum is doing, amplifying the voices of those most affected by climate change, and this call for countries to be more ambitious on mitigation, adaptation, and climate finance.

Climate change and nature have taken centre stage at the UN General Assembly this year.
This builds on last year’s UN Climate Action Summit, where the UK, Bangladesh, and others, launched the Call to Action on Adaptation and Resilience, strengthening support for vulnerable communities whilst building a resilient future for all people, environments, and economies.

"I was pleased Lord Goldsmith, UK Minister for the Environment, was able to pay a virtual visit to Bangladesh in August, where he observed Bangladesh’s work on adaptation and nature-based solutions," said Lord Ahmad.

The UK, as COP26 President-elect, is committed to working with all countries and to joining forces with civil society, companies, and people on the frontline of climate change to inspire action ahead of COP26 next year, he said.

As the world recovers from COVID-19, Lord Ahmad said they must work together to ensure economic recoveries are green and resilient and support their shared objectives for the climate.

"In doing so, we must help those worst-affected by the double tragedy of COVID-19 and climate change to adapt and come back stronger," he said.

Coronavirus has provided a stark reminder of what happens when humanity’s relationship with nature breaks down.

"As we recover, we have an opportunity to protect and restore nature, reducing our exposure both to deadly viruses and climate impacts. The Paris Agreement and the 2030 Agenda for Sustainable Development are crucial frameworks for guiding the recovery," said Lord Ahmad.

He said climate finance is a critical component of both the COP26 and the Paris Agreement.

The UK has committed to doubling International Climate Finance expenditure to at least $11.6 billion between 2021 and 2025, and they are asking other donor countries to match the scale of their ambition.

"We are eager to support climate-vulnerable countries in making a just transition to clean energy. This is critical to ensuring emissions are reduced in time to limit warming to 1.5 degrees," said Lord Ahmad.

This means that we need radical change, said the British Minister.

As Prime Minister Boris Johnson announced in September, the UK, along with the UN Secretary-General, will host a virtual leader-level Ambition Summit on the 12th of December, the five-year anniversary of the Paris Agreement.

The Summit will provide a platform for leaders who are ready to come forward with greater ambition for adaptation; climate finance and mitigation through Nationally Determined Contributions; long-term strategies for getting to net zero; and new climate finance pledges and adaptation plans, said the UK Minister.

"We all have a role in increasing global momentum on climate action," he said.

"We owe it to current and future generations to base our recovery on solid foundations, including a fairer, greener, and more resilient global economy," said the British Minister.