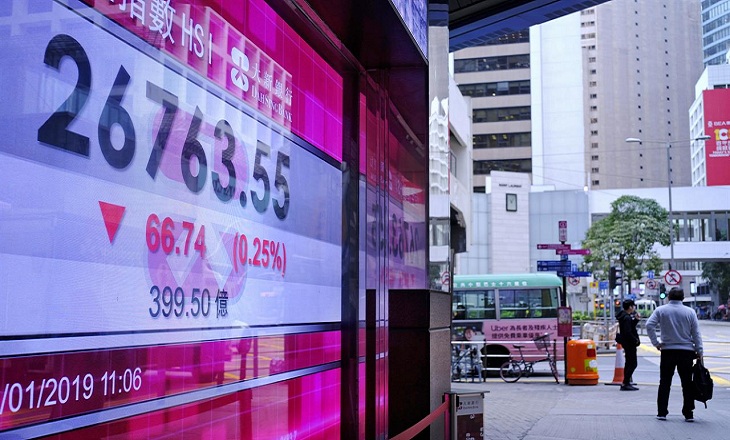 Asian markets were mixed on Wednesday as poor Japanese data and worries about global growth put a damper on trading.

WALL STREET: U.S. indexes climbed Tuesday to their highest level in a month after Chinese officials said measures were in place to help the world's second largest economy through a slowdown. Technology companies rallied after Netflix announced its biggest price increase in history. The broad S&P 500 index jumped 1.1 percent to 2,610.30. The Dow Jones Industrial Average rose 0.7 percent to 24,065.59. The Nasdaq composite, which has many technology stocks, jumped 1.7 percent at 7,023.83.

JAPAN ECONOMY: On Wednesday, Japan said its core machinery orders were flat in November at 863.1 billion yen, compared with October's 7.6 percent rise. This was also lower than analysts' expectations of a 3 percent increase. There was a sharp drop in orders from the manufacturing sector, although overseas orders climbed. The data suggests Japanese companies may be less confident in making big-ticket purchases in the face of global risks.

CHINESE GROWTH: Senior Chinese economic leaders, in outlining their policy plans for 2019, have promised to cut taxes and keep monetary policy flexible to help the country weather a slowdown. The news lifted Chinese shares and global financial markets on Tuesday. Buying eased on Wednesday as traders took stock of the country's falling exports to the U.S. amid a costly trade dispute. Both sides have pledged to work on their issues, but there seems to be a long road ahead with higher-level negotiations to come.

ANALYST'S TAKE: "Markets had a good start to the year on optimism. It is not a surprise that traders are taking a pause to consider the whole global picture, before corporate earnings start to take center stage," said Song Seng Wun, an economist at CIMB Private Banking.

Asia Bibi: Canada in talks with Pakistan over asylum

Bangladeshi products likely to get duty-free access to EAEU countries

Preferential tariffs for Bangladesh, others to continue: UK