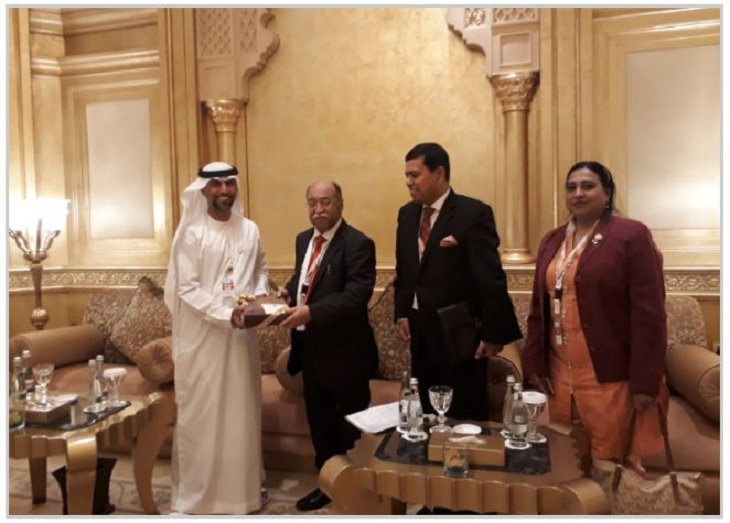 Industries Minister Nurul Majid Mahmud Humayun discussed the issues during his meeting with UAE Minister of Energy and Industry Eng Suhail Mohamed Faraj Al Mazrouei on the sidelines of the 18th session of the general conference of UNIDO in Abu Dhabi on Monday.

The four projects for which Bangladesh sought investments are Di-Ammonium Phosphate Factory on the premises of existing DAP, Rangadia, Chattogram, UREA Fertilizer Factory in northern part of Bangladesh, Triple Super Phosphate (TSP) factory in TSP Complex in Chattogram and Cement Clinker Factory in the complex of TLMP, Tahirpur, Sunamganj.

The Industries Minister also invited the UAE side for investment in other potential sectors like agro-products, steel manufacturing, power plants, petrochemical, apparel-textile, leather, ceramic, and pharmaceuticals.

He recalled the historic visit to the UAE by Father of the Nation Bangabandhu Sheikh Mujibur Rahman in 1974 and his personal friendship with UAE Father of the Nation Sheikh Zayed Bin Sultan Al Nahyan that had laid down the foundation of Bangladesh-UAE bilateral relations.

The minister also referred to Prime Minister Sheikh Hasina’s official visit to the UAE from February 17-19 this year and fruitful talks with the top UAE leadership saying the visit has taken the bilateral relations to a new height and opened new horizon of cooperation between the two countries.

During the Prime Minister’s visit to the UAE, four MoUs were signed related to UAE investment in power, LNG, Special Economic Zone, and ports and other sectors with DP World, ENOC (Emirates National Oil Company) and Private Office of Sheikh Dalmouk.

Bangladesh’s export to the UAE in 2018-19 was $ 340 million while the import was $ 774 million, according to Industries Ministry here.

He said Bangladesh is now focusing on safe, orderly and quality migration and has taken extensive programmes for the training of workforce and providing skilled workers in different trades, particularly the industrial sector.

The Industries Minister suggested establishing a ‘Centre of Excellence’ or ‘Skill Development Centre’ in Bangladesh with assistance from the UAE where our manpower would be trained as per sector-based needs of the UAE.

He also called on the UAE side for the relaxation of visa transfer of Bangladeshi nationals working in the UAE.

Currently, the UAE is issuing visas for only domestic workers (housemaids, babysitters, cooks and personal drivers) on a limited scale [on average 50-80 per month]

Dhaka to host next D-8 summit in April