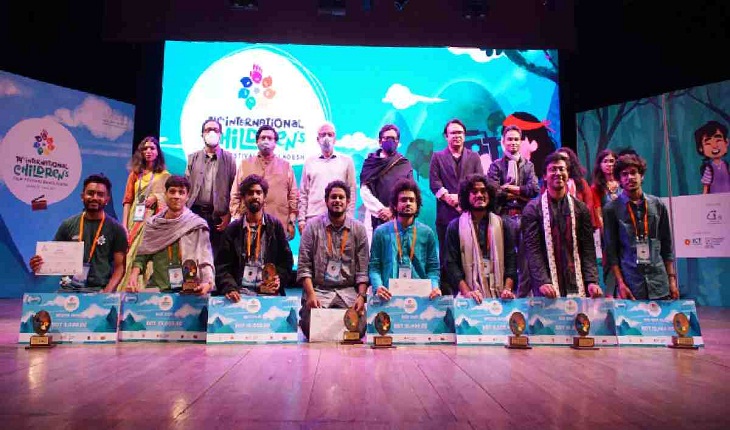 The 14th edition of the International Children's Film Festival Bangladesh (ICFFB) came to an end on Friday.

Organised by the Children’s Film Society (CFS), the closing ceremony of the seven-day festival at the National Theatre Hall of Bangladesh Shilpakala Academy was joined by State Minister for Information and Communication Technology Zunaid Ahmed Palak as the chief guest.

"Our children and youth filmmakers are enriched with the essence and virtue of our glorious history of the 1952 Language Movement and the 1971 Liberation War - thus, they have been successful to arrange a festival like this even during this ongoing pandemic, maintaining safety measures," the Minister said at the event.

"I thank CFS Bangladesh for organising the 14th edition of this film festival this year, and the government will contribute Tk 50 lakh in the next year for this noble venture, to spread the festivity across the country," Zunaid Ahmed added.

BSA director general Liaquat Ali said, "I have never seen a festival like this, organised profoundly and maturely by our children - and I will not forget about this festival till the last day of my life as it was held during the Covid crisis. Our children have displayed their talent, potential and organising capacity by successfully pulling off this event, and I am proud to be here."

A total of 12 awards were presented to the winners at the ceremony, including five films in Under 18 Bangladesh category namely Tenor, Trikonomiti, Thonga, Puppetry and An Interview of A Marionette.

The Best International Feature Film Award in the 14th ICFFB went to Dutch film Jackie and Oopjen, while the Best Director Award went to Ani Oganesyan for Armenian film Under the Stork’s Nest.

Under the Stork’s Nest also won the Best International Short Film Award, while Bangladeshi film A New Normal won in the Social Competition Section. An animated film titled Mujib Amar Pita was screened at the venue.

With the slogan "Future in films", the 14th ICFFB began on January 30 and featured 179 films from 37 countries namely Bangladesh, India, Armenia, the United States, the United Kingdom, Ireland, Philippines, Brazil, Canada, France, Germany, Japan, Italy, Qatar, Iran, Australia, China, Thailand, Bulgaria and others. A total of 1,116 films from 81 countries were submitted to this year's festival.

Children’s Film Society (CFS) Bangladesh has been organising the festival since 2008, with the mission to promote children’s films and encourage children in filmmaking.