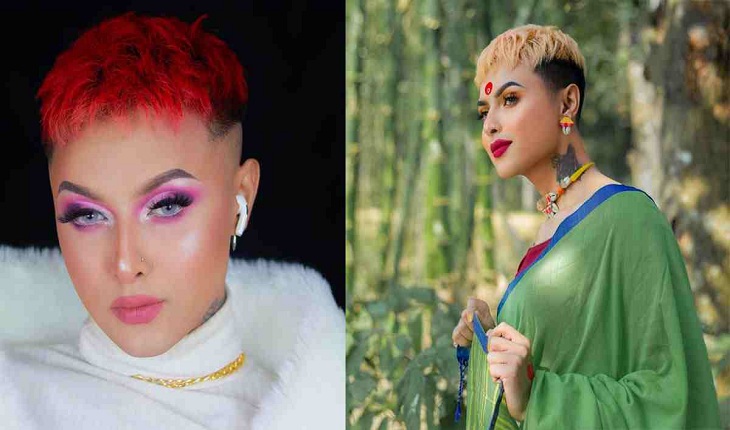 Saad Bin Rabi, aka SaadMua, finally has made history as the first male beauty blogger of Bangladesh. With followers of 224k on Facebook, 27.2k on Instagram, and subscribers of 56.4k on YouTube channel, Saad Bin Rabi has become quite a familiar face to all as a makeup artist. He creates video content focused on makeup tutorials where he shows the different types of beauty products by using them on his face. Meanwhile, he promotes local and global beauty brands.

He designs his video contents targeting female audiences. You will find them occasion-friendly and trendy, as he keeps versatility in every approach. Let’s get some more about this unorthodox artist.

21-year-old Saad started his journey on social media in 2018. Now he has become a social media influencer. It was his childhood fantasy when he often tried to put on his mother’s makeup. Eventually, there were hard times for him to get on with his feminine nature. Getting acceptance by friends and family as well as living on dreams was an impassable challenge to take. Even in this 21st century, he had to look for a hand to hold from the conventional society.

Whatever the conviction is, he realized that he has to come up with a service to give to the community. Here came the makeup. In fact, he didn’t have to go anywhere. He had a great asset- his face and he knew how to draw. He can definitely be a male beauty blogger. Most importantly, it goes with his impression.

Saad believes that makeup is not only a woman thing. It is also normal for a male. The thing you love is not supposed to come by force.

Still, every little step for a great revolution needs a light boost. Saad’s grandmother gave this boost. She helped him buy the makeup instruments despite his parent’s forbiddance. Besides, Saad put a great effort into being expertise in makeup. By the way, the appreciation began to come from both men and women.

Now he often tries to come up with something new. Recently, he is up for Korean makeup. Thus, he serves his audience by a drop of the aesthetics inside him.

Ever since childhood, Saad Bin Rabi always wanted to look beautiful. In fact, everybody does the same. Firstly, his mother used to draw his eyebrows. After growing up, he tried to do that by himself. Later he studied online a lot. Then he came to know about the first male beauty blogger- James Charles. Jeffree Starr, Patrick Starr, and Manny MUA were the best inspiration to him. Saad actually saw himself in them as they also are from the conservative society. He followed them to make his dream come true. Although he didn’t get any real-life mentor, he had to find his way out over and over.

In the beginning, he didn’t get any patronizer to support or work with him. But in course of time, now he gets calls from brands every day. After getting social media followers gradually, he is now more confident than ever. After all, it makes sure that he is on the way to his dream.

The specialty of this video that makes him a world-class male beauty blogger is the different techniques he conducts. He uses special effects in his makeup. You will find it on the YouTube channel of international makeup artists. They often try it for adding value to their video content. Saad used to get those values together and get used to it. It wasn’t easy but he saw the feedback in time.

All he did was just put every criticism back and concentrate on picking things up related to makeup. Now he has become a role model. SaadMua still hopes to go beyond and soon the world will be free from all obstacles.

If the point is makeup artist, the male makeup artist is not a new thing in Bangladesh. You’d find most of the makeup artists here male instead. For instance, the popular ones are Zahid Khan, Monir Hossain, and the national film award winner makeup artists Mahbubur Rahman Manik, Khalilur Rahman.

A decade back, it was pretty hard to exist by being a makeup artist, or the so-called makeup man. But now for the continuously booming film industry and non-stop wedding occasions, the makeup artists are making a living for themselves.

Every day the demand for bridal makeup and party makeup is growing. Moreover, the necessity for makeup artists never ends as long as the entertainment industry exists. Besides the rapid development of social media, they can go global from local by being a male beauty blogger. From freelance to big enterprise, they are getting an approach to their audiences in every way.

The male makeup artists are succeeding at a great instance along with female ones. Although the beauty blogger for a guy is unique, SaadMua already showed the way. You just have to hang on there with your will force. At the end of the day, it will no crime to do what you know the best. Though in this competitive world, many come with some activities, that gives no value to society.

And this makeup artistry is definitely a great work. Most necessarily, no art requires a gender or religion, or border. In this global village, you can create art regardless of whoever you are and even if you are a citizen of a tiny country like Bangladesh.

Being a male beauty blogger serves you as an escape just like SaadMua. He took all the bullies as fun as you see him now in his video. When you wish to change things around yourself, you need to take a lot of shocks. No need to hear overtalking, just make sure that no one gets hurt.