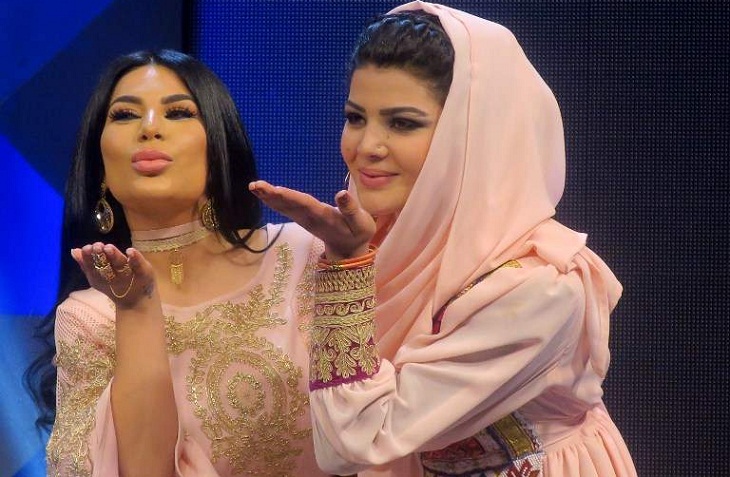 Hashemi, a native of eastern Jalalabad a stronghold of Taliban and Islamic State insurgents will face off against the first rapper of the competition in Monday's final.

Their clash will be one of the most trailblazing in the popular show's 12-year history.

Quietly rooting for Zulala is Aryana Saeed, one of the judges and an indefatigable women's rights activist.

Saeed, who was born in Kabul but usually lives in London, is likened widely to American reality star Kim Kardashian and is despised by religious conservatives for her figure-hugging clothes.

Zulala and Saeed hug in a studio at local television station Tolo, their eyelashes fluttering.

"I have never hidden my support as women have little chance in this country," Saeed told AFP. "For the first time people have voted for a girl and one who comes from a very conservative province, a land of Islamic State zealots."

Afghan Star, Tolo's adaptation of "American Idol", has been a huge hit in conservative Afghanistan since the fall of the Taliban regime that banned music and cinema.

But since its launch in 2005, it has also seen a backlash from mullahs for the way it features unveiled women singing and dancing.

A woman came in third place in 2008, and since then no female singer has gone beyond 7th or 8th position, said Omid Nezami, the show's presenter and a former contestant.

Aside from the backing of the public, Zulala can count on support from her mother Merem Hashemi, a smiling woman who designed and hand-stitched all her daughter's on-stage costumes.

"Even if I do not win, I will be a singer," says Zulala in her deep voice, determination in her almond-shaped eyes.

"I wear traditional dresses but my songs follow the path of Aryana. I want to convey a message to Afghan women: they must claim their rights and explore their talents," she added.

Massood Sanjer, the head of Tolo TV, said it was nothing short of revolutionary that a girl from conservative Jalalabad had reached the finals.

"This is exactly what this country needs right now," he enthused, alluding to growing insecurity.

Tolo's maze of production sets lie behind a thick steel door, manned by armed guards and barricaded against car bombs and gunfire. The TV station has stopped outdoor recordings owing to security concerns.

The Afghan capital is regularly hit with insurgent gun and bomb attacks. Earlier this month, a group of gunmen stormed Afghanistan's largest military hospital in Kabul, killing more than 100 people, according to multiple surviving staff.

Competing against Zulala is Sayed Jamal Mubarez, a barber and a young rapper from northern Mazar-i-Sharif city.

Dressed in baggy pants, a cap and red sneakers, Mubarez shut down his hair salon for three months to participate in the show, borrowing $8 from his neighbours for the bus ride to Kabul.

At 23, he is the breadwinner of his family and is keenly eyeing the Afghan Star prize -- a motorcycle and a trip to Kazakhstan.

"Jamal has been in the lead since the beginning," said Omid.

However, his chances are weak if the voting is along ethnic lines in the deeply divided country. Zulala is from the dominant Pashtun majority, whereas Mubarez is a Hazara, a long persecuted minority.

"Every show I encourage the audience to vote for talent, not according to ethnicity," Omid said.

In the semi-finals, Aryana Saeed took to the stage, intoning a new song dedicated to Farkhunda and Rukshana -- two Afghan women who were beaten to death and became a symbol of endemic violence against women.

"Your status is that of half a man / But you are punished twice as much (...) Arise and shout / Raise your sleeves / Claim your rights / You can do it!"

The final of the show will be live on Monday, on the eve of the Afghan New Year.