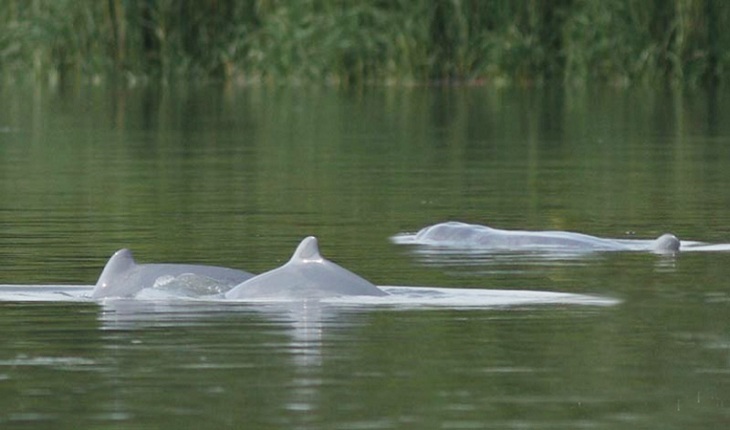 The Sundarbans, the world’s largest mangrove forest known for its unique flora and fauna, is home to some globally endangered species, including the Royal Bengal Tiger and freshwater Ganges and Irrawaddy dolphins.

Overfishing, increasing  maritime traffic, poaching and unplanned tourism, among others, are threatening the fragile dolphin population with extinction.

Accidents in Sundarbans rivers, such as the 2014 oil spill, also affect the vulnerable ecosystem and the dolphins.

During a 2001 survey, Wildlife Conservation Society Bangladesh (WCS) found 225 Ganges dolphins in Sundarbans areas with less salinity, according to ‘Identifying dolphin hotspot in south-eastern Bangladesh’ report. But a survey, conducted between January and April last year, found the population had declined to 159.

Meanwhile, a 2006 survey identified 451 Irrawaddy dolphins in the Sundarbans but another survey in January-April this year found only 198 dolphins of this species remaining, raising serious concerns.

The recorded deaths of 108 dolphins 80 Ganges dolphins, 24 Irrawaddy dolphins and four Porpoise in the Sundarbans and adjoining areas from 2007 to 2019 show just how grim the situation is.

They mainly died after being caught in net, hit by trawlers while some were hunted, according to WCS. About a third of these deaths occurred after the dolphins got tangled in fishing nets.

The occurrence of these deaths, despite the presence of three sanctuaries in the Sundarbans, underscores urgent actions to save the mammals.

Madinul Ahsan, a divisional officer of Wildlife Management and Nature Conservation Department, Khulna, said 14 Ganges and Irrawaddy dolphins died after being caught in fishing nets in the last six years.

On July 31, the body of an eight-foot, roughly 120kg Ganges Dolphin was recovered from the Mongla River at Boro Durgapur in Rampal upazila in Bagerhat.

The mammals need to come up to the surface to breathe. When they are stuck in the net, they are suffocated to death.

Nadim Pervez, coordinator of WCS Education and Livelihood Programme, said it will be possible to turn the Sundarbans into a safe abode for dolphins through concerted efforts.

The WCS formed a ‘citizen science fishermen safety’ who releases dolphins, tortoises and other endangered species tangled in nets.

“Dolphins are protected under the Bangladeshi law. They help keep the rivers and sea environment healthy,” Pervez said.

“Their declining  number is an indicator of falling fish resources. The extinction of dolphins will have a negative impact on the lives and livelihood of people. So, all of us should work together to protect them.”