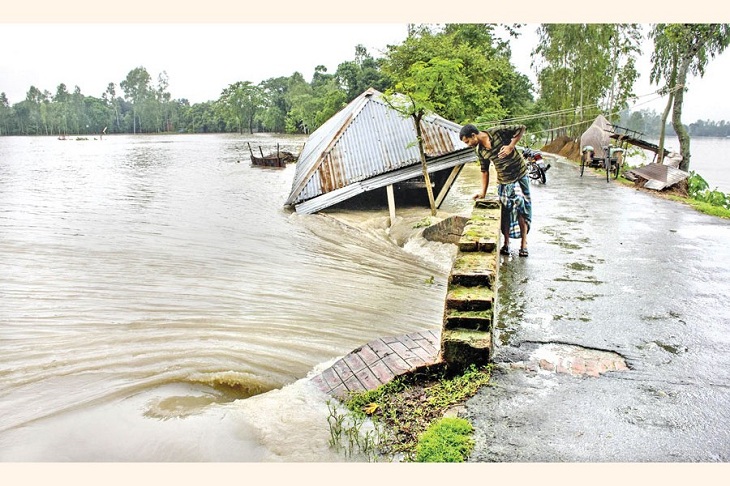 More areas in the northwestern and central region of the country have been inundated by floodwater as the Padma River has swelled further on Thursday.

People living in the low-lying areas of Rajshahi, Chapainawabganj, Natore, Pabna and Kushtia districts have been the worst affected in the region.

As the water level rose in  the Padma and Gorai rivers, flood situation may slightly deteriorate in Kushtia, Magura, Rajbari, Manikganj, Faridpur, Madaripur, Shariatpur and Munshiganj districts, he said.

A large number of houses, structures, trees and standing crops on the land have been washed away by floodwaters in the districts.

Erosion by major rivers may take a serious turn in many areas in the districts, local people said.

In Rajshahi, around 15,692 people were affected by the floodwater in Paba, Godagari and Bagha upazilas. Some 600 families have been shifted to safe places in the city.

At least 11 educational institutions in Bagha upazila have been shut. Crops on 102 hectares of land have been damaged, local sources said.

In Chapainawabganj, low lying areas of Panka union in Shibganj upazila and Narayanpur union in Sadar upazila have been flooded, damaging standing crops.

In Natore, 18 chars in three unions of Lalpur upazila of the district were submerged by floodwater.

The flood situation in Lalpur upazila has been worsening for the last several days following the rise of water level in the Padma.

In Kushtia, at least 18 villages of Chilmari union and 17 villages of Ramkrishnapur union have been inundated.