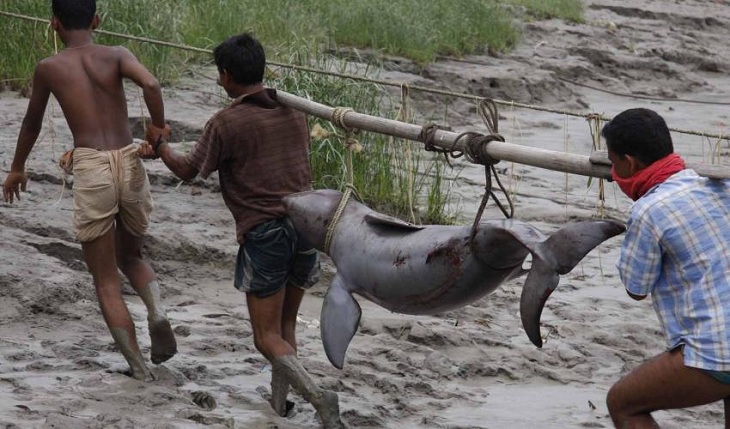 Rina Begum, mother of two, once used to catch shrimp fry in the rivers of the Sundarbans, the world largest mangrove forest and habitat to many endangered species, including Bengal tigers and freshwater dolphins.

“Fishing was our everyday task as we had no other livelihood option rather than catching fish. That’s why my husband and I used to catch shrimp fry in the forest’s rivers, putting our life in danger, as there were risks of tiger attacks and frequent natural disasters,” said Rina.

Getting a job in her locality, Rekhamari village, under Dakope upazila is really a difficult matter as there is no enough work due to its geographical location in one of the country’s disaster-prone areas. So, most of the families of her village had to catch fish using current nets in Dhangmari dolphin sanctuary, putting the endangered aquatic animals at risk, Rina added.

But now, she has changed the condition of her family after receiving a livelihood grant of Taka 40,000 from a project of the Forest Department.

“Once we lived in extreme poverty. Upon receiving the grant, my husband Khokan Sardar started a tea stall in Banishanta brothel area in Mongla one year ago. He also opened another shop in that area this year as his income has increased significantly,” she said.

Sheikhar Roy, another grant recipient who has been living in Dhangmari area at Dakope upazila, said he used to go the jungle in the past to catch fish and collect honey illegally and he was also involved in various illegal activities, including robbery, since there were no enough livelihood opportunities.

“Now I have given up all the wrongdoings and started a small venture…I have opened a grocery shop in my village with the grant money I received from the project of the Forest Department,” he said.

Roy said the grant helped him overcome the plight he had long been suffering and begin a new life leaving his time of darkness behind. “Now I am earning money in right way and leading a decent life,” he added.

The livelihood grants were distributed among the villagers living around the Sundarbans under the ‘Expanding the Protected Area System to Incorporate Aquatic Systems?Project’ aiming to create alternative livelihood opportunities to them and mobilise them to come forward to protect the Sundarbans dolphins.

With the financial support from the United Nations Development Programme (UNDP) and the Global Environment Facility (GEF), the Forest Department in collaboration with IUCN Bangladesh is implementing the project, Divisional Forest Officer and National Project Director Modinul Ahsan told BSS.

In 2012, the government declared Dhangmari, Chandpai and Dudhmukhi areas of Pasur and Andharmanik rivers as dolphin sanctuaries covering 32 linear kilometres to save the endangered aquatic animals.

Most of the people living around the Sundarbans are engaged in fishing using nets, so it is quite impossible to conserve dolphins without creating alternative livelihoods to them, project manager Rezaul Karim Chowdhury said.

That is why, he said, livelihood grants were distributed among the fisher families so that they do not catch fish in the dolphin sanctuaries and protected areas, and come forward to safeguard the endangered aquatic species.