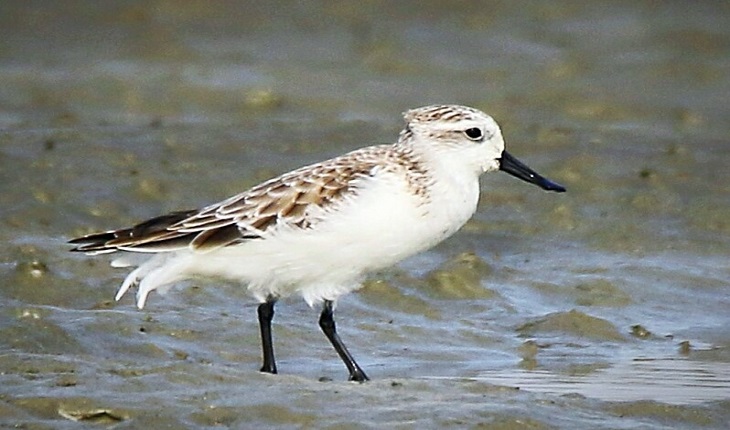 In 1989, a team of waterbird specialist (Dr. John Howes, Dr. David Bakewell, Dr. Susan Wang, Mr. Abdul Wahab Akonda, Dr. SMA Rashid and Dr. Anisuzzaman Khan) first time recorded 257 Spoon-billed Sandpipers, Globally threatened Critically Endangered (CR) wader at Ghasiar Char, besides Moulavir Char and opposite to Dhal Char near Hatiya Island. That was the discovery that Spoonbill Sandpipers wintered in Bangladesh and Bangladesh coast is one of the main feeding and wintering grounds in the world.

To save the wintering habitat of shorebirds with particular focus Spoon-billed Sand Piper at Bangladesh coast, Isabela Foundation in association with Institute of Water Modeling (IWM) prepared the Biodiversity Conservation Management Plan for Sonadia Island with special emphasis on Shorebird Conservation and Monitoring. To support in protecting shorebirds habitat and monitoring the waterbirds, Isabela Foundation has established a Marine Biome Research Station at Sonadia Island.
The spoon-billed sandpiper is a small wader which breeds in north-eastern Russia and winters in Southeast Asia. The population of Spoon-billed Sandpiper is 240-456. This species is listed as Critically Endangered because it has an extremely small population that is undergoing an extremely rapid decline. This is because of a number of factors, including habitat loss in its breeding, passage and wintering grounds, which are compounded by disturbance, pollution, hunting and the effects of climate change. Juvenile recruitment has, until recently, been very low, leading to fears that the population is ageing rapidly; action is now urgently required to prevent the extinction of this species.
The ultimate goal of spoon-billed sandpiper conservation is a secure future for the species. Conservationists have set an ambitious but achievable aim to not only halt the decline by 2025, but increase the population by 50% (to 300 pairs) over that same period.

Swatch of No-ground: A treasure trove of marine lives