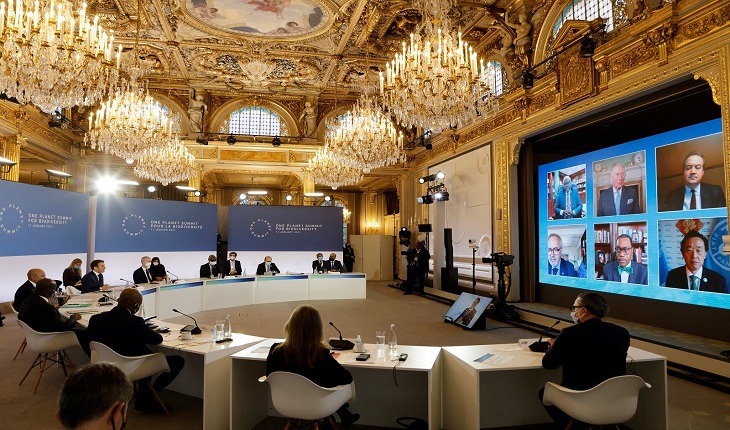 A UN-backed summit Monday of political leaders and CEOs pledging to reverse the accelerating destruction of the natural world was long on promises and short on cash.

The French-led One Planet Summit, backed by the United Nations and the World Bank, saw more than 50 nations support a plan to create protected areas covering 30 percent of global lands and oceans.

The so-called “30-30” initiative could become the cornerstone of a critical biodiversity meet in Kunming, China, postponed last year due to the coronavirus pandemic. While Beijing has yet to announce a new date, sources involved in the preparations say it is likely to take place in early October.

“Until now, we have been destroying our planet, abusing it as if we had a spare one,” UN chief Antonio Guterres told the Paris meeting via a video link from New York. “We have been poisoning air, land and water, and filling our oceans with plastic. And now nature is striking back,” he said, pointing to the Covid crisis as a case in point. So far, efforts to restore nature on a global scale have failed spectacularly.

The planet is on the cusp of a mass extinction event — only the sixth in half-a-billion years — in which species are disappearing at 100 to 1,000 times the normal “background” rate, most scientists agree.

A landmark 2019 UN report warned that one million species, about one-in-eight, are threatened, mostly due to habitat loss and our ever-expanding appetites. The impact of climate change has only recently started to kick in. Roughly a football pitch of old-growth tropical forest is felled or goes up in smoke every six seconds.

A score of biodiversity targets set a decade ago by the world’s nations have all been badly missed, Guterres noted. At risk are the clean air, drinkable water and healthy ecosystems upon which our species — and most living things — depend for survival.

The emerging consensus that protecting nature is also essential for the fight against climate change was a dominant theme at the one-day meeting. “Obviously it is right to focus on climate change,” said British Prime Minister Boris Johnson, who will host a critical climate summit in Glasgow come November. “But we won’t achieve a real balance with our planet unless we protect nature as well,” he added, speaking from London.

The One Planet gathering saw $10 billion dollars (eight million euros) earmarked for the Great Green Wall, a project to restore degraded lands in the Sahel along an 8,000-kilometre (5,000-mile) band from the Atlantic to the Red Sea. The money revives the stalled project, launched in 2007 by a dozen north African nations, but is dwarfed by the amounts needed on a global scale.

“Biodiversity is facing a financial gap of US$711 billion per year until 2030,” said Guterres. Some green groups say the 30-30 plan doesn’t go far enough, while others caution against unintended consequences.

Indigenous peoples in particular are wary over the proposed expansion of protected areas, pointing to cases in Africa and Asia where such measures have led to eviction from their ancestral lands. “Previous expansion of protected areas has meant human rights violations,” Joji Carino, Senior Policy Advisor for the Forest Peoples Programme, told AFP.