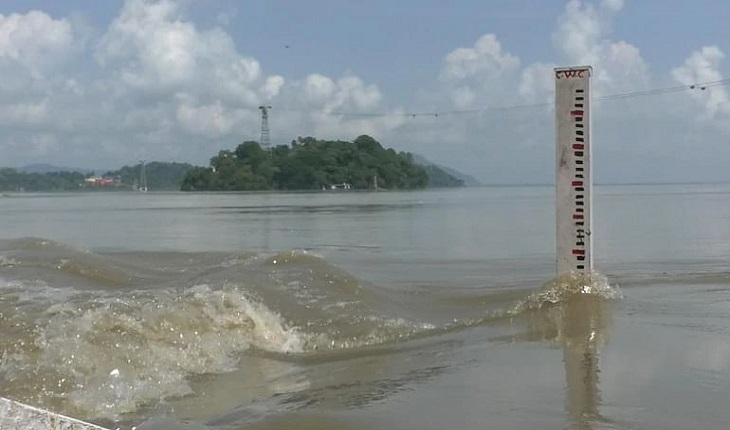 Flood situation in Brahmaputra river basin of four upazilas in the district deteriorated further as the water level increased in the last 24 hours ending at 9am today due to incessant rainfall and on rush of hilly waters from the upstream.

Bangladesh Water Development Board (BWDB) sources said the water level of the Brahmaputra river increased by 5 cm during the period and the river was flowing 5 cm above its danger mark at Fulchharighat point of the district.

As a result, the chars located on the river basin areas of Sundarganj, Sadar, Fulchhari and Shaghata upazilas of the district have been inundated and many char people have been marooned and are passing their days in misery.

The low lying areas located on the western side of the river were also inundated.

Abdus Salam Jakir, chairman of Kamarjani Union Parishad under Sadar upazila said with the rise of water level in the river, the river erosion has taken serious turn at different points of the union and hundreds of houses of the union went under flood water creating untold sufferings to the flood victims.

On the other hand, the water level of the rivers -- the Teesta and the Ghagot -- decreased significantly during the period and both the rivers were flowing below their danger levels.

Executive Engineer of BWDB Mokhlasur Rahman said as the Brahmaputra was flowing over its danger mark, the officials and employees of the board have been kept on high alert to protect the embankment from any kind of damage.

Superintendent of police Muhammad Towhidul Islam said police patrolling by engine driven boats had been intensified to check piracy in the chars and western sides of the river.

Talking to BSS, deputy commissioner (DC) Abdul Matin said the district and the upazila administration is fully prepared with relief materials and manpower to address the flood situation in the district efficiently.

They were also monitoring the situation closely.  The district administration is planning to open a control room to inform the people about the overall flood situation, the DC added.

Saplings distributed among 400 students in Lalmonirhat

Light to moderate rain likely in parts of country

Signal 3 for the maritime ports