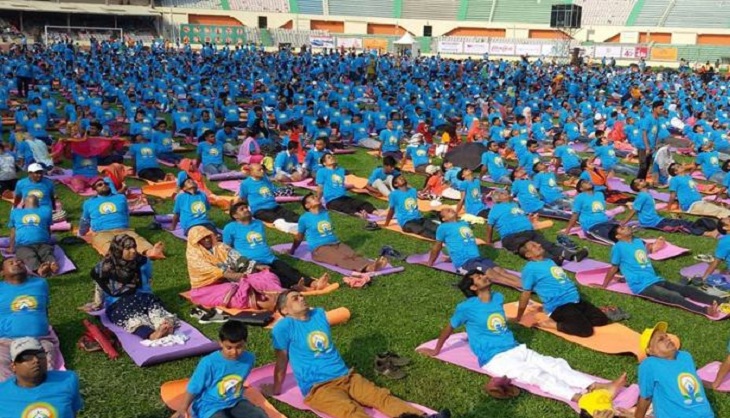 Commemorating International Day of Yoga 2018, Indian High Commission in Dhaka on Thursday organised an event at Bangabandhu National Stadium in the capital where thousands of people from all walks of life wearing blue and yellow T-shirts joined.

The programme included yoga demonstration, a mass yoga session and a lucky draw. Entry to the event was free.

This year, over 10,000 yoga enthusiasts attended it.

In a Facebook post, the Indian High Commissioner in Dhaka wrote, “Great turnout of over 10,000 enthusiastic participants at the 4th International Day of Yoga in Dhaka, Bangladesh, including Road Transport and Bridges Minister and Sports Minister of the Govt of Bangladesh; celebrities; Ambassadors of Bhutan, Nepal, Sri Lanka, Maldives, Myanmar, Afghanistan, USA, Vietnam, Switzerland, Vatican, EU; and UNFPA Rep.”

In 2017, there was a record turnout of around 5000 yoga enthusiasts at the Bangabandhu National Stadium in the city, said the High Commission.

On June 12, several celebrities of Bangladesh joined the Indian High Commission in Dhaka at the curtain raiser of the International Day of Yoga 2018.

The United Nations on December 11, 2014, proclaimed June 21 as the International Yoga Day.

The resolution establishing the International Day of Yoga was proposed by India and co-sponsored by a record 175 member states.

All participants received, on the first-cum-first-served basis, free yoga mats, t-shirts and gift hampers and a chance to win attractive prizes in the lucky draw.

Prizes in the lucky draw included a Tata Tiago car, a Bajaj motorcycle, a holiday package to a destination in India, a trip to Delhi for a couple and a hospitality package for a couple in a five-star hotel in Dhaka.

Global vaccination to take up to 6 yrs — Australian expert

People aged over 40 years to be vaccinated: Health Minister

Key workers in 145 countries must get Covid jabs by June-end: WHO