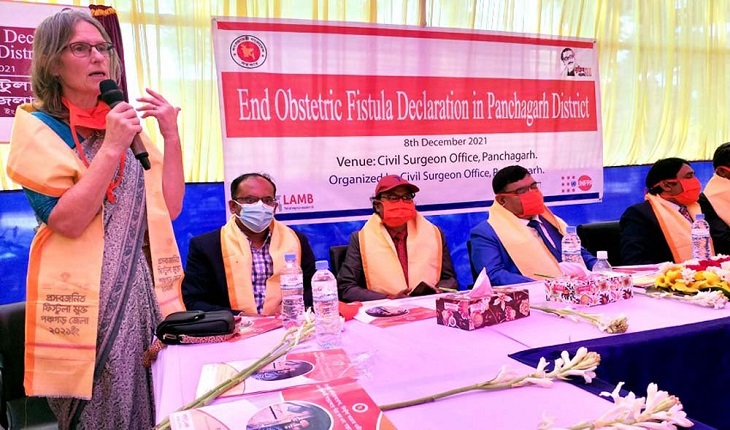 The Civil Surgeon Office with technical support of LAMB Hospital arranged the event under the UNFPA Bangladesh funded Elimination of Genital Fistula by Capturing, Treating, Rehabilitating and Reintegrating in Bangladesh (FRRei) project.

Obstetric fistula symptomatic cases were identified first at community levels and then referred to upazila and district level hospitals for diagnosis and for confirmed diagnosis and surgical repair at LAMB Hospital at Parbatipur in Dinajpur.

"Each of the confirmed obstetric fistula patients received psychosocial counseling before and after safe and timely surgeries at LAMB Hospital and need based rehabilitation and reintegration support," Dr. Ahmed said.

Besides, advocacy with media, religious leaders and awareness sessions with reproductive age women, school going girls and boys, distribution of posters and leaflets on obstetric fistula were conducted.

"After repair of obstetric fistula, need based rehabilitation programs of fistula survivors like providing training on tailoring, income generating activities, handicrafts, sanitary pad and mask making and cash support were provided by LAMB Hospital," he said.

"We conducted surveys in all 2,83,149 households in all five upazilas of Panchagarh and primarily identified 96 suspected obstetric fistula cases with problems of leaking of urine or feces or both," he said.

Of them, 63 cases were finally diagnosed as obstetric fistula, 60 were repaired at LAMB Hospital, 50 women were completely cured, 10 women declared as incurable fistula and three cases were inoperable due to other causes.

The chief guest said ending obstetric fistula is possible by 2030 by ensuring divisional and district level approaches with inclusive roles of different stakeholders and better coordination to get the ultimate results.

"Participation of other department like Social Services, Women's Affairs and Youth Development is crucial to ensure rehabilitation of obstetric fistula survivors and replicate the lesson learnt in Panchagarh to other districts," he said.

One killed in Panchagarh road accident