A Baishakhi fair in the village 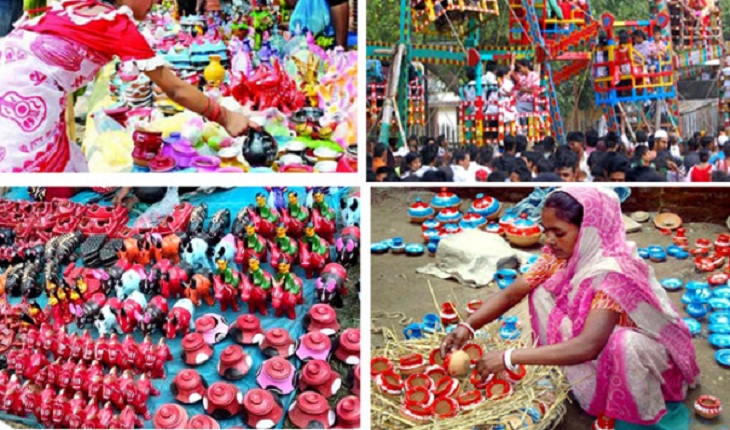 Boishakhi Mela, a traditional village fair celebrating the Bengali New Year, is now gaining popularity in towns and cities across the country.

And through such fairs, the young generation is getting the opportunity to know about our heritage and culture, while the older ones get the chance to relive their childhood amusements.

As our lives move away from our rural agrarian roots, more and more traditions that were quintessential to the Bengali experience are slowly lost.

Some of these are left in the past where they belong, but some deserve the right to be nurtured, protected, and preserved for ourselves, and the generations that will only hear about a rural Bengal. A village fair or “grammo mela” is, one such piece of intangible heritage.

The melas in the villages have a similar flavour, colourful, vibrant, crowded, and mostly charmingly simple, especially for eyes used to the hard-core glitz and glamour of the city, which can tend to be on the exhausting side.

A typical fair would be organised in a wide open space, with makeshift stalls, all brimming with merchandise that is mostly not of the useful kind, but things that bring inexplicable joy. The potters, with regular pans and pots, but also toy-versions of them; other stores with the little ‘botis’ and ‘belun piri’ and the wooden dhekis.

Women with their stalls full of glass bangles, and other little trinkets—the bead necklace, the golden anklets. Men and women selling snacks, from the more common ‘fuchka’ and ‘jhal muri’ to the less often seen ‘khaja’, ‘kodma,’ ‘batasha’ and ‘khoi.’ Some have stalls with ‘mishti.’  The weavers bring their plethora of colourful ‘ornas’ and saris, both for adults and children, and of course, the neatly folded lungis and colourful gamchas. Bamboo and wicker baskets and trays, wooden decoration pieces and toys, all kinds of things imaginable, are on display for perusal and purchase! The craftsmen in the villages gear up productions ahead of such melas, typically for Eid, Pahela Boishakh and Saraswati Puja, and in Bengal, during Durga Puja too!

No village mela is complete nowadays without loud music playing from someone’s humongous, but bad quality speakers, and of course, the corner with ‘nagordola’ --a rickety, small and loudly creaking but fun local version of a Ferris wheel, and a similar merry-go-round, all painted in bright colours and rural motifs, run on the heave-ho of the owner’s staff, and no motor whatsoever. Perhaps some game vendors too, offering you the chance to shoot balloons with an ancient wooden airgun, or a small circus troupe would be performing. Or perhaps, a ‘jatra-dol’ or a rural magician showing tricks, or artists performing with puppets. The bioscope was popular too, with people sticking their faces under a curtain, looking at pictures of various things of wonder from around the world.

Village fairs were the culmination of the Bengali tradition of enjoying festivals, and keep people connected to their roots, while providing a much needed boost to the incomes of handicraft workers and artisans, nurturing the age-old crafts of weaving, clay pottery, painting and wood carving.

If all of this evokes memories of simpler days in you, just hop skip to a large village somewhere outside the cities, and experience once more, the joy of a village fair. Just FYI, the Sonargaon Folk Art and Craft Museum organises a three-day fair, with a rigorous effort to preserve the traditional “Graam-er Mela,” for three days on the occasion of Pahela Baishakh. Hop over to buy yourself some local toys like tepa putuls, crafts like Shok-er Hari, clay pottery and toys, and of course ‘taant’ clothes and jamdani saris. Shubho Noboborsho.

Sunscreen use could lead to better blood vessel health