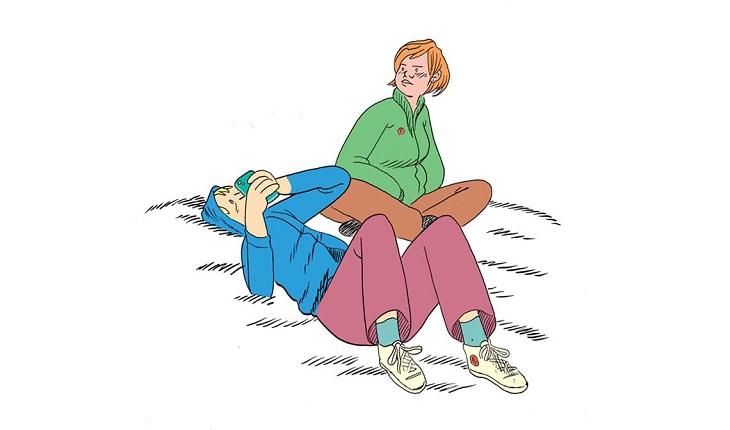 Everyone knows that we live in a time of constant acceleration, of vertiginous change, of transformation or looming disaster everywhere you look. Partisans are girding for civil war, robots are coming for our jobs, and the news feels like a multicar pileup every time you fire up Twitter. Our pessimists see crises everywhere; our optimists insist that we’re just anxious because the world is changing faster than our primitive ape brains can process.

But what if the feeling of acceleration is an illusion, conjured by our expectations of perpetual progress and exaggerated by the distorting filter of the internet? What if we — or at least we in the developed world, in America and Europe and the Pacific Rim — really inhabit an era in which repetition is more the norm than invention; in which stalemate rather than revolution stamps our politics; in which sclerosis afflicts public institutions and private life alike; in which new developments in science, new exploratory projects, consistently underdeliver? What if the meltdown at the Iowa caucuses, an antique system undone by pseudo-innovation and incompetence, was much more emblematic of our age than any great catastrophe or breakthrough?

The truth of the first decades of the 21st century, a truth that helped give us the Trump presidency but will still be an important truth when he is gone, is that we probably aren’t entering a 1930-style crisis for Western liberalism or hurtling forward toward transhumanism or extinction. Instead, we are aging, comfortable and stuck, cut off from the past and no longer optimistic about the future, spurning both memory and ambition while we await some saving innovation or revelation, growing old unhappily together in the light of tiny screens.

The farther you get from that iPhone glow, the clearer it becomes: Our civilisation has entered into decadence.

The word “decadence” is used promiscuously but rarely precisely. In political debates, it’s associated with a lack of resolution in the face of threats — with Neville Chamberlain and W.B. Yeats’ line about the best lacking all conviction. In the popular imagination, it’s associated with sex and gluttony, with pornographic romances and chocolate strawberries. Aesthetically and intellectually it hints at exhaustion, finality — “the feeling, at once oppressive and exalting, of being the last in a series,” in the words of the Russian poet Vyacheslav Ivanov.

But it’s possible to distill a useful definition from all these associations. Following in the footsteps of the great cultural critic Jacques Barzun, we can say that decadence refers to economic stagnation, institutional decay and cultural and intellectual exhaustion at a high level of material prosperity and technological development. Under decadence, Barzun wrote, “The forms of art as of life seem exhausted, the stages of development have been run through. Institutions function painfully. Repetition and frustration are the intolerable result.” He added, “When people accept futility and the absurd as normal, the culture is decadent.” And crucially, the stagnation is often a consequence of previous development: The decadent society is, by definition, a victim of its own success.

Note that this definition does not imply a definitive moral or aesthetic judgment. (“The term is not a slur,” Barzun wrote. “It is a technical label.”) A society that generates a lot of bad movies need not be decadent; a society that makes the same movies over and over again might be. A society run by the cruel and arrogant might not be decadent; a society where even the wise and good can’t legislate might be. A crime-ridden society isn’t necessarily decadent; a peaceable, aging, childless society beset by flares of nihilistic violence looks closer to our definition.

Nor does this definition imply that decadence is necessarily an overture to a catastrophe, in which Visigoths torch Manhattan or the coronavirus has dominion over all. History isn’t always a morality play, and decadence is a comfortable disease: The Chinese and Ottoman empires persisted for centuries under decadent conditions, and it was more than 400 years from Caligula to the actual fall of Rome.

“What fascinates and terrifies us about the Roman Empire is not that it finally went smash,” wrote W.H. Auden of that endless autumn, but rather that “it managed to last for four centuries without creativity, warmth, or hope.”

Whether we are waiting for Christians or barbarians, a renaissance or the singularity, the dilemma that Auden described is now not Rome’s but ours.