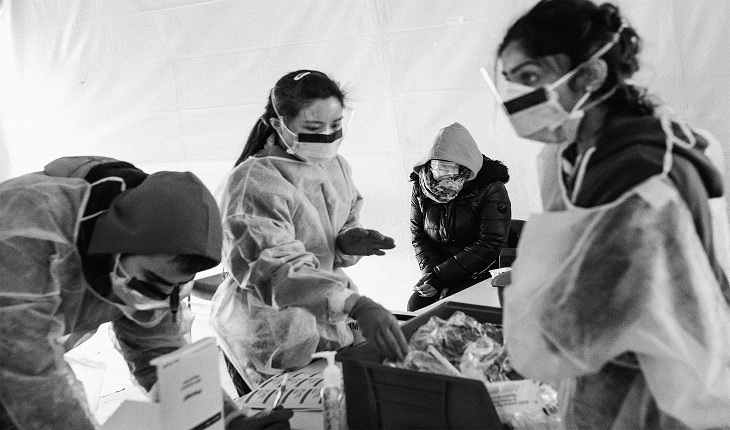 In the world war against the coronavirus, there’s both very good news and very bad news.

To understand what lies ahead, epidemiologists study the places battered first. Here are lessons from the front lines:

First, we have a toolbox that works. Even for countries that bungled the initial response, like Italy and the United States, there’s hope: Social distancing succeeds in slowing the contagion, and it does so quickly — within a few weeks of the adoption of tough measures.

Both Italy and Iran appear to have passed through the worst of this wave of COVID-19, as measured by new cases. But even after new cases slow, deaths continue at a high rate because people often die four weeks after they were infected.

In the United States, two of the first places to suffer outbreaks were the Seattle area and New Rochelle (a suburb of New York). There were firm responses for both, with New Rochelle subject to a controversial containment zone and Washington state working with large companies to get people to work from home.

This was effective. New Rochelle is no longer a hot spot, and Washington also flattened its curve, with coronavirus hospitalisations dropping.

For the United States as a whole, confirmed infections are still increasing rapidly, but one hopeful sign is that Kinsa Health Internet-linked thermometers show a downward trend in fevers across most of the country (these are for all kinds of fevers, not just those from COVID-19, and some people with infections are asymptomatic).

On balance, all this is excellent news. Early on, epidemiologists simply didn’t know how well social distancing would work. Now it’s clearer: We have the tools to save lives, if we will use them.

Second, countless thousands will still die because of past mistakes and complacency.

A pandemic is like an oil tanker: It continues to move forward long after you hit the brakes. In China, deaths didn’t fall sharply until a month after controls had been imposed. The benefits from social distancing in the United States will take time to ripple through the system, and there will continue to be new infections — and many more deaths.

The Institute for Health Metrics and Evaluation at the University of Washington has a constantly updated model that predicts that the daily death toll across the United States will rise until April 16 and then slowly decline. By the beginning of August, it estimates that more than 93,000 Americans will have died from COVID-19.

(I interrupt this bleakness for a dose of uplift: In Oregon, a 103-year-old, William Lapschies, caught the coronavirus in early March but recovered in time to celebrate his 104th birthday with pizza and chocolate cake on Wednesday. Happy 104th, Mr. Lapschies!)

More bad news: Case fatality rates have been creeping up, and lethality may be greater than many had expected. Germany was hailed for a death rate of only about 0.5%, and South Korea was not much higher; now both have case fatality rates well above 1%.

In models of the virus that my colleague Stuart A. Thompson and I published, we used a death rate of 1%. But if the South Korean death rate by age is applied to the demography of the United States, the American case fatality rate is about 2%, according to Dr. Christopher Murray, director of the Institute for Health Metrics and Evaluation.

A great majority of the deaths in the United States will have been avoidable. South Korea and the United States had their first coronavirus cases on the same day, but Seoul did a far better job managing the response. The upshot: It has suffered only 174 coronavirus deaths, equivalent to 1,100 for a population the size of America’s.

That suggests that we may lose 90,000 Americans in this wave of infections because the United States did not manage the crisis as well as South Korea did. As of Friday evening, the US had already had more than 7,000 deaths.

Third, while we can bend the curve, it will bend back when we relax our social distancing.

This is more bad news, for many people seem to believe that once we get through this grim month or two, the nightmare will be over. But the virus is resilient, and health experts warn that this may be just the first wave of what may be many waves of infections until we get a vaccine sometime in 2021.

Already, Japan after initial success is seeing a surge of infections, while China and South Korea have struggled with imported infections; that seems inevitable as economies restart and travel resumes.

“There’s this biological fact that still in South Korea, the people who haven’t been infected aren’t immune, and as soon as there’s an end to social distancing they’ll be vulnerable again,” noted Dr. Mark Poznansky of Harvard Medical School.

The same is true in the United States.

“We’re just looking at this first wave,” noted Murray. He estimates that in June, some 95% of Americans will still be susceptible to the virus.

“The world’s on fire with this virus,” said Michael Osterholm, an epidemiologist at the University of Minnesota, and this means that even if one country succeeds in putting out the blaze, sparks will keep arriving from elsewhere to cause new outbreaks. He added: “I think the transmission will continue to occur for some time.”

Natore UP chairman arrested for beating up farmer