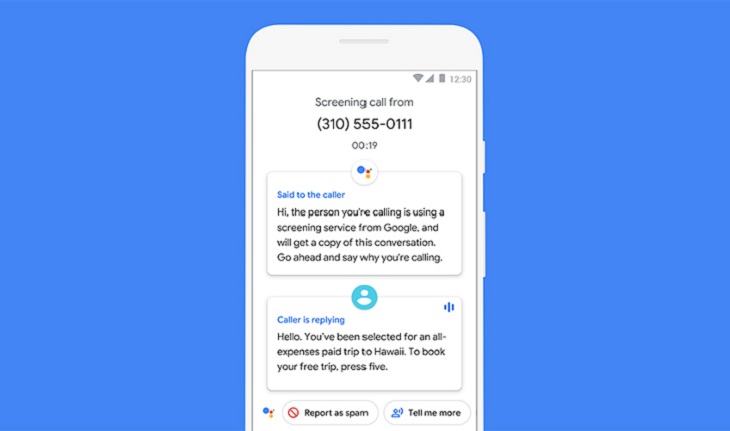 Call screen is one of the most useful applications of the Google Assistant. Activated by default on Google Pixel devices, Call Screen acts as a shield between you and annoying spammers. It uses Google Assistant to ask callers about their objective of calling and transcribes their response in real-time.

With this, you can easily decide whether you must attend your caller or give them a cold shoulder. Using smart replies, Call Screen lets users ask follow-up questions from callers so as to effectively combat scammers, bots, and also helps in meetings and noisy environments.

Alas, Call Screen is a feature limited to the Google Pixel 3/3XL and older Pixel smartphones. But there is a possibility that it could soon be rolled out to Nokia and Motorola smartphones.

The latest beta of the Google Phone app has hidden instances which point to Google’s testing of Call Screen on certain devices from Motorola and Nokia. These references of Call Screen were pulled up by Reddit user u/hkyq.

Last year, HMD Global announced that all devices upwards of Nokia 2 will be launched under Android One, implying that they already have an edge over others in terms of receiving Google’s best applications of technology.

Meanwhile, Motorola too announced Motorola One and Motorola One Power under Android One banner last year after betting on stock Android for its smartphones since the very first Moto G device. Thus, Android One smartphones are expected the earliest recipients of Call Screen if it extends to devices outside of Google’s own catalog.

It must be noted that Call Screen is currently available only for English-speaking users in the U.S. and was recently rolled out in Canada as part of a beta trial. By launching it on other devices, Google might be planning to target native English speakers in regions other than North America.

Meanwhile, if you’re in Canada, you can sign up as beta tester for the Google Phone app and set Google Assistant’s default language to English (Canada) to screen you calls before you take them.

Artificial Intelligence apps to look out for in 2019