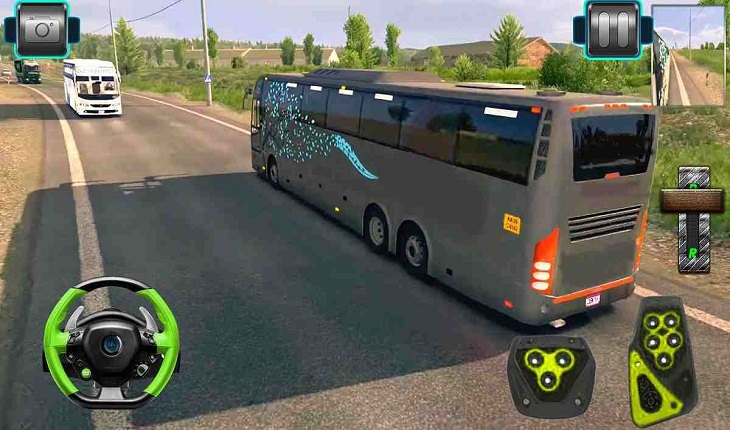 Many games these days put a good amount of emphasis on objectives and mechanical skills, but finding a game that’s closer to reality is harder to find these days. Bus simulators aren’t exactly contenders to be the poster children of the gaming industry, but they are surprisingly enjoyable and don’t deserve to be as underrated as they are now. If you’ve always been slightly curious about how it’s like to drive a bus, these games will help you without the need to get off your couch. Here are the best bus simulator games for Android/IOS right now.

If you’re looking for one of the most realistic experiences ever, Coach Bus Simulator is the choice for you. Its title, though not flashy, does explain everything there is to know about this game. It is the first coach driving game that actually teaches you how to drive a coach in real life, down to the smallest detail.

As coaches aren’t known for speed or flashiness, the game takes a calmer approach and presents breathtaking landscapes to cruise through as you expose yourself to the life of a coach driver and what it entails. The coach interior is realistic and customizable; as an added bonus, you’ll have passengers to work with too. The graphics are pretty impressive for a mobile game and do what it can to put this genre on the map.

The title implies you’ll be put in the shoes of Indonesian bus drivers with this game, but that isn’t even a bad thing, even if you are not familiar with the nation and what is in store for you. The good thing about zeroing in on the realism of this genre is that you’ll get to actually drive Indonesian buses through Indonesian cities and other locations that actually exist!

Fun customizations are available such as honks, colors, and much more. The game still has somewhat of an online ranking system that tracks how well you measure globally with your bus driving skills. Its simulation mechanics are rather simple and it is approachable for anyone keen to understand the Indonesian road and bus culture a little better.

Heavy Bus Simulator is free and takes a look at the South American side of the world, namely Brazil. Created by the same guys who did Heavy Truck Simulator, this title offers many cities in Brazil based on the ones that exist and splashes in some routes that allow you to explore the countryside.

The gameplay in particular exhibits an impressive amount of realism, properly obeying the physics behind driving these large buses. Steering and brake controls are very intuitive and do justice to being a simulator. Things like traffic lights, tickets, and fuel management are all thrown in there to give players a taste of the profession and being a driver that is properly under traffic law.

Where Heavy Bus Simulator shines in responsive controls and straightforward gameplay, World Bus Driver Simulator adds layers of complexity that will satisfy the palate of more experienced players. The terrain becomes a new variable that is more emphasized and driving with various positions depending on the road’s situation makes it an intense experience that isn’t for the faint of heart.

Cycles in the day and the weather are factors that need to be considered, and the inclusion of a manual gearbox for your control options enforces an experience that mirrors reality. In fact, the game takes itself and its players so seriously that an online leadership board is around to ensure that everyone can gauge their performance on a daily basis. Possibly one of the most advanced in terms of mechanics and requirements - definitely not a pick for beginners.

The word “Ultimate” is accurate when it comes to what this title has to offer. This game goes global as drivers will get to experience the landscape of maps based in the USA, Germany, Italy, Russia, Spain, France, Netherlands, Brazil, and more! Players can bring out their inner competitors as the game features a multiplayer league online that will gauge how well you can drive based on your ability to navigate through traffic, weather and overall competence as your passengers will get to review you!

The game’s graphics also complements the competitive setting of the game, allowing players to customize their buses, adjust the radio stations and even provide players with social interactions of passengers. If the controls are a little daunting to come to terms with, there is an “easy control” mode that just requires tilts, buttons, and a steering wheel.

Although this title is one of the oldest on the list, it still survives with a strong following and for good reason. This title centers around more rural landscapes, allowing players to face the challenges that may present themselves in mountains, urban areas, deserts, snows, and the countryside. The maps are based on Rome, Los Angeles, Berlin, and Paris - just to name a few.

Players will get to choose 15 different kinds of buses and will have to be responsible for their passengers and damage to the vehicle on top of navigating through the unpredictable roads. The controls are on the simpler side to grasp, but the in-game weather and terrain mechanics ensure that there is still a learning curve that players can enjoy regardless of their skill level.