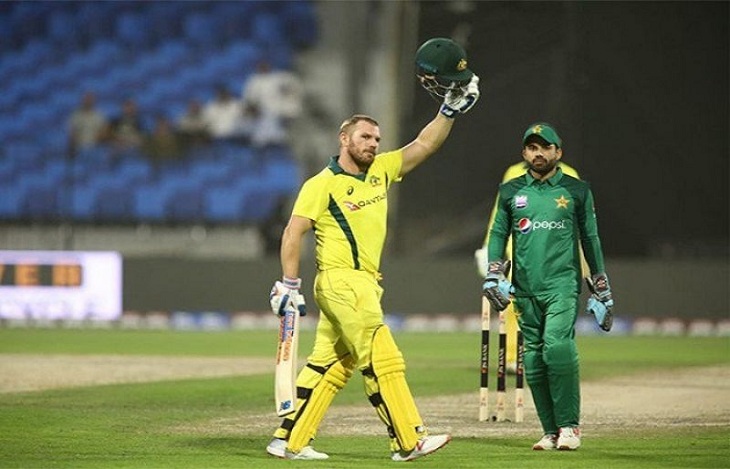 The win gives Australia an unassailable 3-0 lead in the five-match series with the last two games taking place in Dubai on Friday and Sunday.

Australia won the first two matches by identical margins of eight wickets -- both in Sharjah -- and continued their dominance of a depleted Pakistan side who rested six of their key players in a surprise move, two months before the World Cup.

Cummins, fresh after resting the first two matches, followed his 14 wickets in the series win in India earlier this month, by dismissing Shan Masood (two) in his third over and then had Haris Sohail (one) and Mohammad Rizwan (nought) in his fourth.

That left Pakistan reeling at 16-3 before opener Imam-ul-Haq (46) and Shoaib Malik (32) put on a fourth wicket stand of 59 before Glenn Maxwell trapped Imam leg-before.

Umar Akmal (36) and Imad Wasim (43) also fought during their stand of 53 for the sixth wicket but Zampa mopped up the tail with career best figures.

It was Finch again who anchored Australia after light rain delayed the start by 15 minutes.

Finch, who scored 116 and 153 not out in the first two matches, could have been the first Australian to score three hundreds in as many ODIs.

Sri Lankan Kumar Sangakkara holds the record of most successive hundreds with four while nine other batsmen have struck three consecutive hundreds in ODI cricket.

Maxwell, 71 with eight boundaries and a six, gave the total its final touches.

Finch holed out to leg-spinner Yasir Shah in the 42nd over but he had once again built the innings.

Junaid Khan dismissed Shaun Marsh for 14 to leave Australia struggling at 20-2 but Finch added 84 for the third wicket with Peter Handscomb (47 with six boundaries) to help his team recover.

Finch added another 36 with Marcus Stoinis (10) and 48 for the fifth wicket with Maxwell.

Pakistan included Shinwari and Junaid in place of Faheem Ashraf and Mohammad Abbas.