Success in Sri Lanka will give us momentum: Mithun 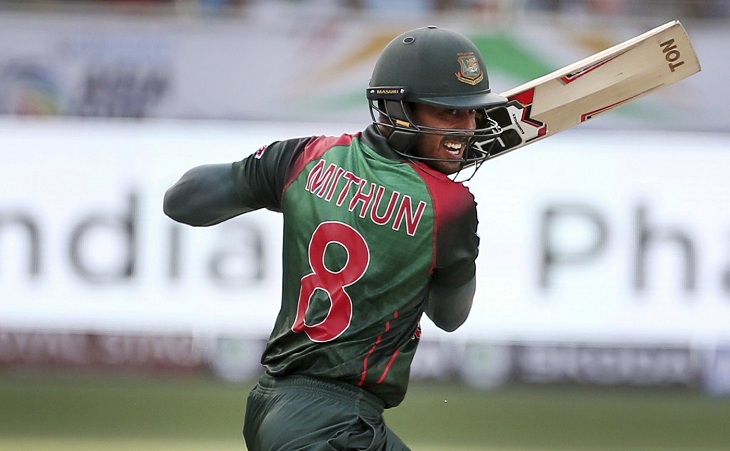 Middle order batsman Mohammad Mithun believes that Bangladesh A team’s success in the just concluded tour in Sri Lanka boosted their confidence ahead of their tour in India in which they would play a three-match T20 Internationals and a two-match Test series.

Bangladesh A team was comprised with several national team members, who were included into the team to have some match practice ahead of India tour.

Bangladesh cricket was not going great guns considering their performance in the recent past and they needed some sort of success to overcome the disappointment.

Saif Hasan came up with sterling all-round performance as he struck a scintillating century and snared 2-25 with cherry to help Bangladesh A record a 98-run win over Sri Lanka A by D/L method in the third and series deciding match at R Premadasa Stadium in Colombo on Saturday.

By virtue of this victory, Bangladesh took the one-day series by 2-1 after settling for draw in two longer version matches earlier.

The second string Bangladesh team lost the first match by 7 wickets before winning the last two games with a thrilling one-wicket victory in second and now the third one by 98 runs.

“This was an important series for us. We were all feeling Bangladesh cricket is not having the best of times. We all were feeling that we should do something to bring the momentum back for Bangladesh cricket,” Mithun said here on Sunday after reaching from Sri Lanka.

“A-team comes after national team and we knew if we can win in Sri Lanka it will be great achievement for us,” he said.

“We won the series for our (all team members) honest commitment,” he opined.

Mithun said they scored runs against good bowling attack which also gives them some confidence.

“The bowling of Sri Lanka was good but at the same time we scored against some good bowling and it will certainly makes us confident in the upcoming days,” he concluded.

Mithun ruled out of 3rd ODI vs New Zealand