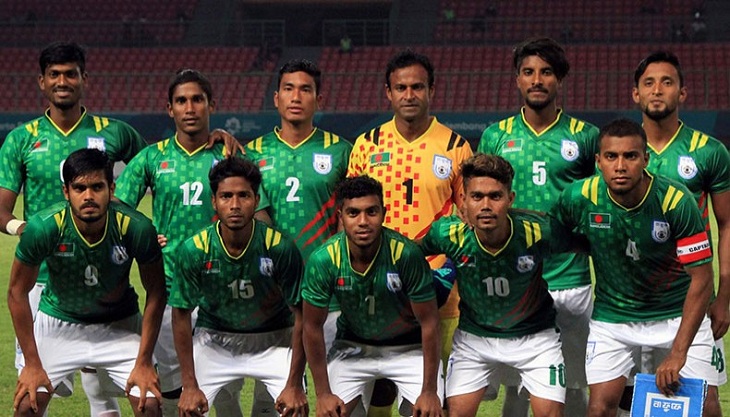 A devastating performance from Bangladesh National Football Team  shown the emerging rise in country's Football. Jamal bhuyan and his co. showed the highest level of dedication in the field that nearly took away the match from the rising football power of Asia, India.

Though India National Football Team finally managed to avoid a defeat against the Bangladesh National Football team in their third group match of the Joint Qualification of the FIFA World Cup 2022 and AFC Asian Cup 2023 on Tuesday night.

Lag behind 0-1, Indian booters equalised the game at 89th minute with Adil Khan's header. Brandon's corner found Adil Khan near the post and the defender's powerful header bulged the net.

Saad Uddin netted the ball into Indian goalpost with a superb header at 42nd minute of the game making Salt Lake Stadium stunned on Tuesday night.

Jamal Bhuyan swings in a delightful free-kick towards the far post from the left flank. Bheke loses sight of Saad, Gurpreet failed to judge the ball correctly and could not collect the ball from the air thus Saad Uddin converts a free header into a goal making it 1-0.

The men in red and green started their campaign with a 0-1 goal defeat against Afghanistan in their first match in the Tajik capital Dushanbe on September 10 and conceded a 0-2 goals defeat against Asian Champions Qatar in their second match in Dhaka on October 10.

In the remaining group matches, Bangladesh will play Oman on November 14 in Oman, Afghanistan on March 26 next year in Bangladesh, Qatar on March 31 in Qatar, India on June 4 in Bangladesh and Oman on June 9 in Bangladesh.

On the other hand, India are now in the 4th slot of the point table securing 2 points from two matches with one draw and one defeat.

India started their campaign conceding 1-2 goals defeat against Oman in their first match in Guwahati on September 5 but played out a goalless draw (0-0) against Qatar in their second game in Doha on September 10.

Bangladesh getting ready to face India

Bangladesh go down fighting 2-0 to Qatar