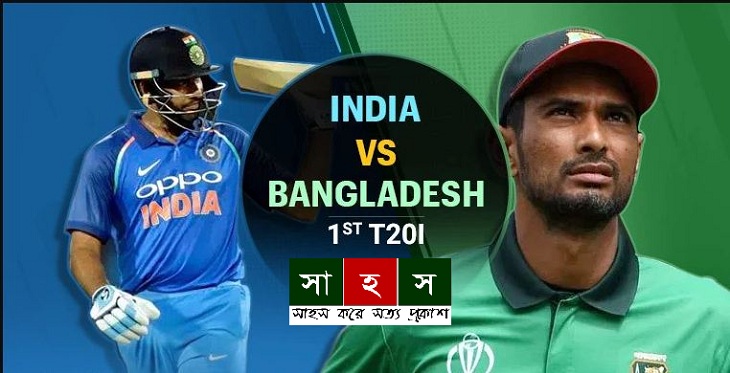 Bangladesh won the toss and elected to bowl first against India in their first T20I of the three-match series at Arun Jaitley Stadium in New Delhi on Sunday evening.

The match is scheduled to begin at 7:30pm Bangladeshi Time amid the recent turmoil which rocked Bangladesh’s cricket fraternity to the core due to ban on Shakib Al Hasan by ICC.

Shivan Dube gets his maiden India cap from stand-in skipper Rohit Sharma. Meanwhile, KL Rahul is playing as well, informs out man, Akash, from the ground.

Many questioned the logic behind hosting the match in Delhi at a time when the city is battling the post-Diwali air pollution but the Board of Control for Cricket in India (BCCI) ruled out shifting the tie due to logistical issues.

Bangladesh looked to pose a good challenge, especially with their strong batting line up which is led by skipper Mahmudullah Riyad. But Tigers will definitely miss the service of Shakib Al Hasan who has been banned by ICC for not reporting fixing approaches, whose usefulness with both bat and ball has often won matches for Bangladesh.

Shakib was banned for two years for breaching the ICC Anti-Corruption Code.

In his absence, the onus will be on Liton Das, Mushfiqur Rahim and Soumya Sarker to deliver the goods with the bat.

Bangladesh will also miss the service of Tamim Iqbal and seam bowling all-rounder Mohammad Saifuddin, but their absence was not as shocking as Tamim skipped the tour as he and his wife are expecting their second child while Saifuddin is suffering from a back injury.

The three-match T20 series is indeed the both sides‘ preparations for 2020 October’s Men’s T20 World Cup.

But Bangladesh are yet to master the art of T20 cricket which is evident in the stats. Tigers played eight T20 Internationals against India and lost all of them. But, they have something to cherish despite their poor T20 record. It will be just the second time the two sides have met on Indian soil in the short format, following India’s dramatic single run victory in Bangalore during the group stages of ICC World Twenty20 2016.

Bangladesh shared a Tri-series T20 trophy with Afghanistan last month at home and will surely take the field against a young Indian side led by Rohit Sharma.

But for India, it is time for youngsters to step up as run-machine Virat Kohli is skipping the series.

Stand-in captain Rohit Sharma is in fine form and he would look to carry his Test form into the shortest format. But his opening partner Shikhar Dhawan is yet to find that big knock after making a comeback to white-ball cricket from a thumb injury that had cut short his World Cup in England.

KL Rahul, Shreyas Iyer, Krunal Pandya and Rishabh Pant look certainties in the middle order. If Shivam Dube is handed his much-awaited India debut, he will have to be placed up in the batting order, considering his big-hitting ability.

Manish Pandey and Sanju Samson will also vie for spots in the middle order whereas Yuzvendra Chahal, Khaleel Ahmed, Deepak Chahar and Washington Sundar are India’s other bowling options.

Like Dhawan, it is also an opportunity for leg-spinner Chahal to earn back his place in the Indian side.

A lack of opportunities this year has put brakes on his career which at one time soared in company of Kuldeep Yadav.

Tigers face off India amid severe air pollution in Delhi

Shakib urges fans and followers for calm and patience

India Series: Mominul to lead in Tests, Mahmudullah in T20Is