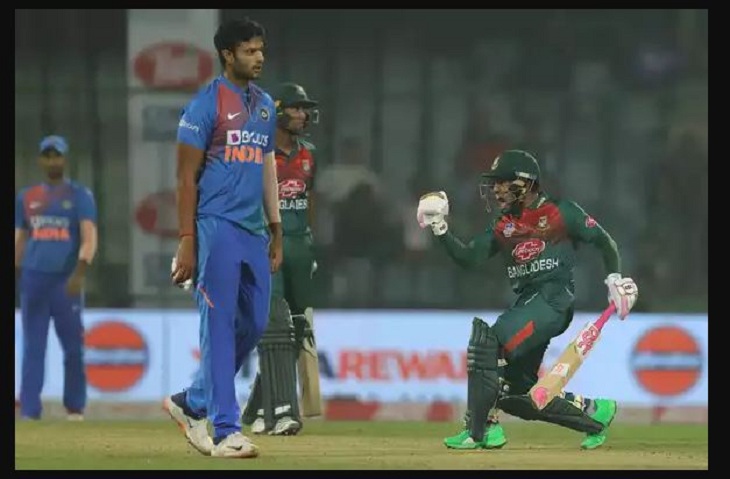 Bangladesh’s Tigers finally got their first ever T20I match win against India in the first match of the three-match series at Arun Jaitley Stadium in New Delhi on Sunday night.

Tiger Mushfiqur Rahim and Mahmudullah Riyad crossed the target of 149 spearing three balls and won the match by seven wickets.

Mahmudullah hit a huge sixer on long on while Bangladesh needed only one run in remaining four balls to win.

In 19th over, Bangladesh was needed 22 runs from 12 balls. In the first two balls, Mahmudullah and Mushfiq took only two runs but later, little tiger Mushfiqur Rahim knocked four consecutive boundaries in the last four balls which ensured Bangladesh’s victory.

Earlier, Bangladesh skipper Mahmudullah Riyad electing to field first at the start of the three-match series.

India lost two early wickets including skipper Rohit Sharma who was trapped leg before wicket for nine off paceman Shafiul Islam in the first over of the innings.

Aminul then struck twice to rattle the opposition top-order with KL Rahul, who made 15, and Shreyas Iyer, who scored 22, letting go of their starts.

Opening batsman Shikhar Dhawan made 41 with three sixes but returned to the pavilion after being run out as India slumped further.

Krunal Pandya, 15 not out, and Washington Sundar, unbeaten on 14, played useful cameos to help the hosts get 30 runs from the last 12 deliveries.

Late hits from Washington and Krunal helped India to get the momentum and they will fight with the bowl to trouble Bangladeshi batsman.

Dhawan was the top-scorer with 41 but consumed 42 balls for it. The Bangladesh bowlers used the variations well to make the run-scoring difficult.

"We came here, practised for three days, adjusted to the conditions and applied," Afif says after the first half of the match, adding that: "149 is a chaseable score. If we start well, we should be able to chase it."

Player Of The Match : Mushfiqur Rahim

India Series: Mominul to lead in Tests, Mahmudullah in T20Is

Mahmudullah tunes up his bat in 2nd practice match

Mushfiqur Rahim to give up wicket-keeping in Tests