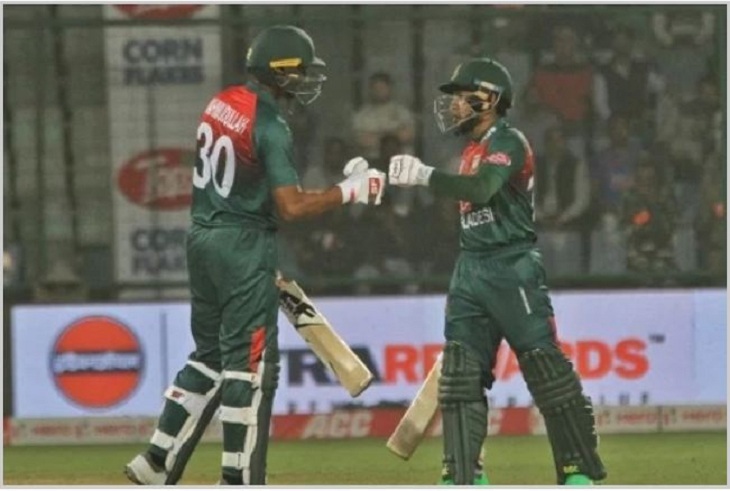 Standing on the brink of a history, Bangladesh will lock horns against hosts India in the second T20 of three-match series at Saurashtra Cricket Association Stadium in Rajkot tomorrow (Thursday).

A victory will not only just confirm a mere series victory; the magnitude of that victory would be huge. If they can beat India for the second match in a row to take an unassailable lead, Bangladesh would be the first overseas team in the history to win a three-match bilateral T20I series against India on Indian soil.

But the Tigers didn’t appear to be weighed down by the history; rather they take it as another game to seal the deal with a match to go. They seems to be confident indeed after gaining the momentum by thrashing India in the first match by seven wickets.

The victory came at a moment when the country’s cricket was at lowest ebb, following the ICC-imposed ban on Shakib Al Hasan and the players’ strike against Bangladesh Cricket Board (BCB) and when no one sensed a victory of Bangladesh against the mighty neighbours.

Overcoming all the adversities, Bangladesh snapped their eight-match T20 losing streak against India but leaving aside their disturbed mind to put up a clinical performance in the first match.

While the senior like Mushfiqur Rahim drove the side home, he was ably assisted by the young brigades like Mohammad Naim, Afif Hossain and Aminul Islam Biplob.

Soumya Sarkar also had significant contribution, much to the delight of the Tigers fans.

All those things however made them so much confident ahead of the second game that Bangladesh just wasn’t willing to give anything a thought, apart from a victory.

“This is our best chance to win the series,” Bangladesh captain Mahmudullah Riyad said during the pre-match conference on Wednesday.

“The boys have stood firm in the first match and won it in a convincing fashion. If we can replicate that performance, I hope we can win it.”

Bangladesh chief selector Minhajul Abedin Nannu also looked confident as he stated that if the cricketers could perform to their true potentials yet again, they stand on a good chance to clinch the series.

“To win against India at their own den is a big achievement. But one has to remember India is vastly experienced as a T20 team. Having said that, if the players could bring up their best, a good contest is in the offing,” he added.

That India has never lost a three-match bilateral T20I series at home and if they are to protect that record, the ‘Men in Blue’ will have to come up with a much-improved performance in Rajkot.

India skipper Rohit Sharma, who leads the side in absence of Virat Kohli is all set to play his 100th T20I match and will be only the second player to appear in the 100 match in this format after Shoaib Malik.

Captain Rohit is very keen to not only make it memorable but also keep the series alive.

“The batsmen need to take the onus. Hopefully we can bounce back in the series,” he said.

There is no reason Bangladesh would bring up any change to the squad after such a victory unless anyone gets injured at the eleventh hour, Bangladesh chief selector Minhajul hinted.

But while the Rajkot ground is predicted to offer a high scoring affair, Bangladesh coach Russell Domingo differed with the fact.

According to the size of the stadium, 170-will is par score; he said adding that it is not a pitch of 200-plus runs.

There are also some stats on the cards for Tigers players, which they could use as motivation to beat India.