We can beat India any day if we play to our potential: Domingo 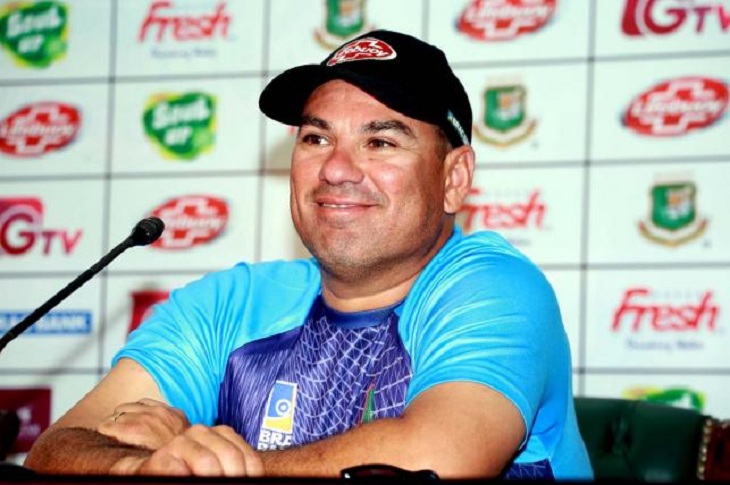 Bangladesh head coach Russell Domingo was quite upbeat to clinch the three-match T20 series against India as his side geared up for the third and series deciding match at Vidarbha Cricket Association Stadium in Nagpur tomorrow (Sunday).

The series is now locked at 1-1 after Bangladesh won the first game by seven wickets while India bounced back to stay alive with eight-wicket victory in the second game.

Domingo said that he had no qualms about the victory against the mighty neighbours if Bangladesh players play to their true potential in the last game.

“I am really proud the way boys played this far. Good performance in the first game and in the second game we got ourselves into good position with bat but maybe made a few mistakes with batting. But if we control that and if we can play potential we can push India hard and beat them any day,” he said in a pre-match conference on Saturday here.

What actually made Domingo brimming with confidence was India’s inexperienced bowling line up. He said the batsmen would have to curb the mistakes that they had done in the second match and in doing so they could put India’s bowling under massive pressure.

Bangladesh got a good start in the second game before crumbled in the middle overs to loss the baton and thereby lost the game by eight wickets.

The players’ tough mentality was other thing that Domingo noted.

The Bangladesh cricket was at its lowest ebb before the series following players’ strike against BCB and ICC’s ban on team’s best player Shakib Al Hasan.

It seemed Bangladesh would end up losing all the matches in the tour but to their credit, they won the first game to make sure that cricket will get back on track.

“It has been a tough couple of weeks before this tour, but the players deserve a lot of credit. The energy and desire they have shown in the last 10 days has been fantastic. They were willing to try new things. They are playing against a quality side away from home. If someone said to us two weeks ago that we will be one-all coming into Nagpur, no one would have believed it,” Domingo remarked.

“So we are pretty happy where are, and it is a great opportunity tomorrow. The guys are really excited by it. At the end of the day, India is one of the best sides in the world. No one gave Bangladesh a chance, but we think if we play to our potential, we have a chance tomorrow.”

And Domingo also made it clear that Bangladesh didn’t break down mentally despite tasting a crushing defeat in the second game. He ruled out any tactical changes in their immediate reaction to the defeat, saying that the players are in right track.

“We feel India has a lot of left-handed batters in their top six. Our off spinners worked a game ago, but just because it didn’t work in the last game doesn’t mean everything has to change,” he said.

“We don’t want to be a team that makes knee-jerk reactions to a loss. It has been the case for this team for too long. We want to back a certain group of players. If somebody has a bad game doesn’t mean he doesn’t play for the next six months. It is part of T20 cricket. We believe that those who played in the first couple of games are good enough. We don’t want to make a lot of tactical changes just because someone played really well against us.”