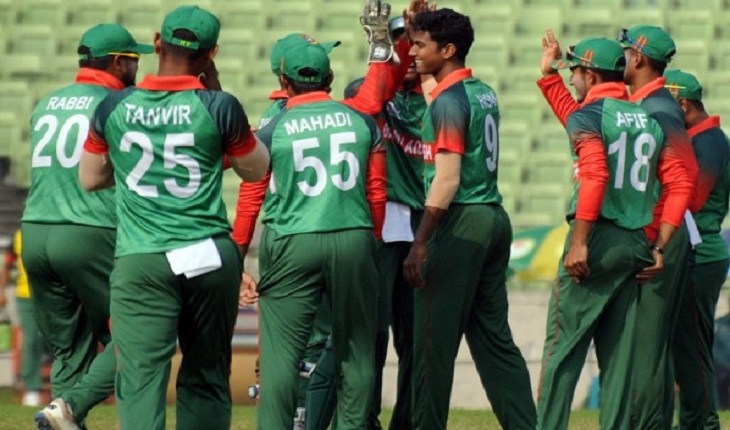 Bangladesh Men's cricket team(U-23) swept into the final of the ongoing 13th South Asian Games (SA Games) after 44 runs in their third game in Nepal on Saturday swatting away from the host country.

Captain Gyanendra Malla of Nepal's first bat decision was largely vindicated when their former skipper Paras Khadka struck early with three dismissals inside three overs. But captain Najmul Hossain Shanto and Afif Hossain from Bangladesh not only halted the proceedings, but also lifted the innings perceptibly leading their side to a daunting 155-6 in 20 overs.

In reaction, Nepal were reduced to 111-9 after Bangladeshi bowlers used all their experience to the dismay of more than 10,000 Nepali fans who thronged the stadium for the early match.

The gold medal competition of the hosts finished with the loss and will now play either Bhutan or Maldives for bronze. Since losing to Sri Lanka U-23 in the tournament opener, Nepal had defeated both the teams in the league stage despite putting a daunting 172 on the table.

Nepal had a brilliant start when a new ball came up with former skipper Paras Khadka and spun through the protection of Bangladesh to pick up three fast wickets. In the second over, Paras bowled opener Mohammad Naim (6) and returned to the fourth point to strip Soumya Sarkar's (6) experience off Karan KC and then bowled Saif Hassan the new man.

Yet Shanto and Afif kept a strong 94-run partnership in their match-winning partnership until the latter was the aggressor. Afif in his 28-ball 52 smashed six boundaries and a six, while Shanto struck a 60-ball 75 not out of four sixes and fours.

In his four-over spell, Paras bowled economically, conceding only 15 runs. Four overs were also bowled by Dipendra Singh Airee picking up two wickets in the last over 10 runs.

Nepal had a sedate start and with only 11 runs on the board lost Paras (nine) in the fourth over. We were soon reduced to 14-3 before Gyanendra and with a 32-run stand for the fourth wicket, Dipendra tried to resurrect the series.

Gyanendra, who was the last batsman in Nepal to be dismissed from the squad with a run-a-ball 43 that included three fours and a six. During his 13-ball 16, Dipendra hit two boundaries. The only other batsman to make runs in double figures was Abinash Bohora (13).