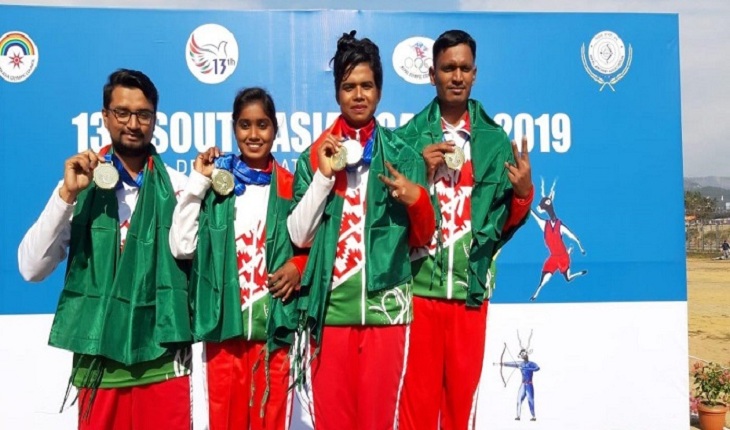 Celebrated archer Mohammad Ruman Shana and Eti Khatun have displayed a brilliant show in archery securing three gold medals each -- two in team event each and one in singles event -- in the Nepalese tourist town of Pokhara.

Riding on their outstanding performances, Bangladeshi archers secured all the 10 gold medals in archery enabling the country to achieve the record of clinching 19 gold medals in en edition since the tournament was introduced in 1984 also in Nepal.

The previous best performance of the country in the SA Games was 18 gold medals earned in 2010 in Dhaka. But, Bangladesh’s highest number of gold medals won in a single game held outside Bangladesh was 7, in the Madras Games in 1995.

Ruman Shana and Eti Khatun were the best performers of Bangladesh in the regional games after swimmer Mosharraf Hossain Khan, who secured a record five gold medals for Bangladesh in a single edition—three in individual events and two in relay--in the 2nd SAF Games (presently SA Games) in Dhaka in 1985.

Thereafter, Bangladeshi archers proved their worth displaying cent percent accuracy in the discipline as Suma Biswas, Mohammad Sohel Rana, Mohammad Ruman Shana and Eti Khatun bagged the remaining four gold medals in archery on the 9th day of the regional meet on Monday, in absence of Indian archers, who was banned by International Archery Federation.

Eti Khatun bagged the day’s last and the 10th archery gold for the red and green beating Sonam Dema of Bhutan by 7-3 set points in the women’s recurve singles to raise country gold tally to 18 golds, equaling the record of 2010 Games in Dhaka.

The achievement was even more remarkable considering Bangladesh never won gold previously in the South Asian Games archery. Their previous best performance in the SA Games archery was the three silver medals in Guwahati in 2016.

Bangladesh also continued their success in the compound team events.

Earlier last Saturday, Bangladeshi athletes earned three more gold medals -- two in weightlifting and one in fencing -- on the 7th day of the 10-day seven-nation 13th Asian Games in Nepal.