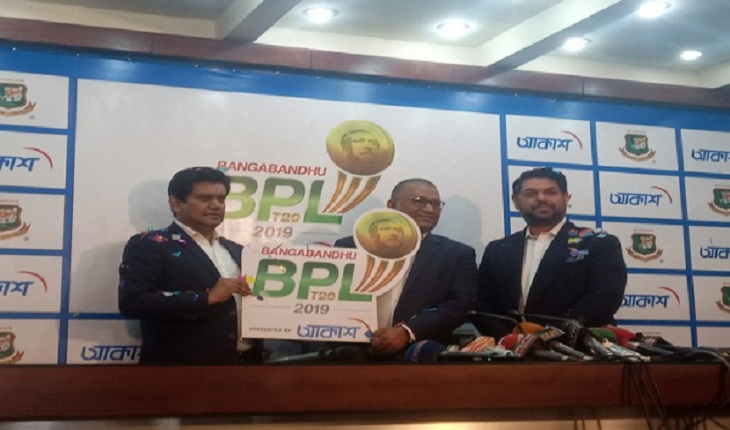 All seven teams are gearing up in full flow as Bangabandhu Bangladesh Premier League (BBPL) is set to roll out from Wednesday.

The Bangladesh Cricket Board has re-branded the annual T20 league cricket competition for this season to mark the birth anniversary of Sheikh Mujibur Rahman, the father of the nation.

A mega opening ceremony held at the Sher-e-Bangla National Stadium on Sunday was graced by leading personalities from home and abroad.

BCB decided to host the tournament on their own after cutting ties with the franchises due to their unreasonable demands despite having completed as many as six editions of the competition with them.

BCB instead opted to have sponsors for the special edition of the tournament and eventually managed to get six interested companies for the seven participating teams. Consequently, the seventh remaining team - Comilla Warriors - will be backed by the team while the rest six teams are managed by their respective sponsors under the umbrella of the BCB.

Doubts prevailed if the board will be able to manage everything on it's own, from logistics support to getting star attractions on board as earlier franchises were the ones who brought glamour by signing up names like AB de Villiers, David Warner and Steve Smith to name a few.

And even though some of the big names synonymous with T20 cricket have given it a miss, due to international commitments or otherwise, the competition promises to be the ideal stepping stone for the local talent, with one eye on next year's ICC T20 World Cup to be played in Australia. Bangladesh chief selector Minhajul Abedin said that they are keeping a close eye on the tournament as they are yet to fix the gaps in the national T20 side.

"All the players we have are included in the BPL squad as this BPL is very crucial for us," said Minhajul. "The T20 World Cup is knocking on the door. Also, we have a lot of T20 matches coming. Our performance there is vital. We are working in the areas in which we are lacking. Team Management and we all want to see good performances from the players in these areas and we will hopefully see that in the BPL. If we get some players from here (BPL), then it will be a bonus.

"A lot of good overseas players are coming. Our local cricketers will have a great opportunity to gain experience playing with them. In the shorter format, you have to be involved in the game in such a manner that every moment is a challenge for them. This is a huge opportunity for the players who cannot cope up with the T20 format. As the World Cup is coming up, we are working on our squad. This is a big opportunity for the youngsters too. If they play well, it is good for the team," Minhajul added.

BCB has, on many occasions, indicated that this edition of the BPL will be used as a platform to groom their cricketers in the shortest format as they will be the ones under the spotlight, running the show. The board then made it mandatory to pick a leg spinner and pacer bowling at or above 140kmph in each of the squads. However, as things are shaping up, it does not guarantee that everything will take place as planned by the board.

BCB president Nazmul Hasan clearly stated that they can provide a guideline for the teams but certainly cannot insist on team make-up as there are sponsors involved with different teams. "Certainly we cannot insist anything as there are sponsors involved with respective teams," said Nazmul. "They have their own plans but we do feel that this BPL should be able to create space for our local stars to express themselves."

The BCB academy premises is overcrowded with cricketers of seven different teams as they are looking forward to sketch down their plans for the upcoming tournament that will see 47 matches in 39 days where seven teams - Dhaka Platoon, Khulna Tigers, Rajshahi Royals, Rangpur Rangers, Sylhet Thunder, Comilla Warriors and Chattogram Challengers - will fight to clinch the title this special edition.

Mohammad Salahuddin, the only local coach in the tournament, feels that there will be cut throat competition and each team will have their own plans to make sure they are better prepared than their opponent on the given day. "There is no doubt that it will be a fiercely competitive," said Salahuddin, who has won BPL on two occasions earlier and is eyeing to add another feather to his crown.

"We have picked cricketers as per our requirement because for us winning is more important than anything else," he said, adding that their plans are mainly focused around their local talent due to the fact there are very few foreign cricketers in the tournament who can win matches on their own.

With the competition format allowing for only up to four overseas cricketers in a playing XI, the teams are eager to see how the remaining seven do in the competition. According to Salahuddin, those seven will make a difference for their team. "There will be seven local cricketers [in a team] and they will make the difference because all of them have to excel in their roles if any team wants to progress far in the competition. If you are behind your opponent in those seven spots, then it will be very difficult to make a comeback."

Besides, Bangladesh's selection panel, too, will be keenly observing "the seven" in each of the seven sides for this is not just any other edition of BPL but rather a roadmap for the next T20 World Cup.

Rangpur expect Mustafizur to hit back form in BBPL

BBPL teams advised to include a mandatory leg-spinner, fast bowler