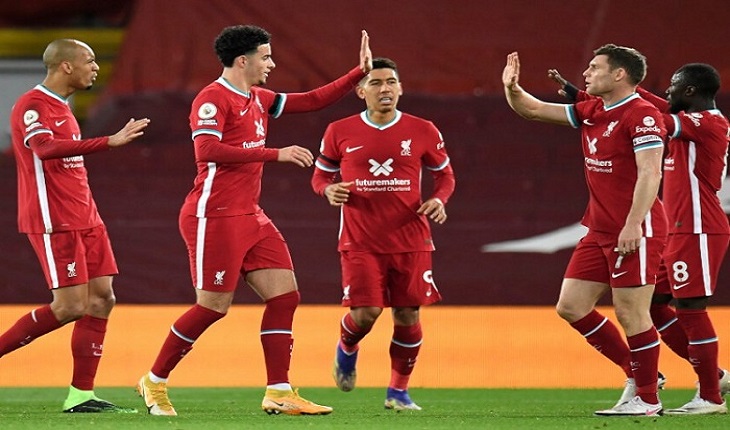 Jurgen Klopp's side remain behind Spurs on goal difference but the manner of the win sounded an ominous warning to those hoping to wrest the title away from the champions.

Liverpool also established a new club record of 64 home league games unbeaten, breaking their previous best run, which was set between February 1978 and January 1981 and itself ended by Leicester.

And they achieved this latest win amid a squad crisis that has robbed them of Virgil van Dijk, Trent Alexander-Arnold, Joe Gomez, Jordan Henderson, Thiago Alcantara and Mohamed Salah.

"There were a lot of good things. I can't pick one that pleased me most - maybe the performance of James Milner at right-back," Klopp said.

"He played an exceptional game, first there and then in midfield. That is what we expect from ourselves.

"The injuries were a massive shock in that moment but the boys have to offer solutions. We have centre-halves, they are really young. They are not experienced, you saw the bench tonight."

Klopp's side took the lead midway through the first half when Jonny Evans nodded a corner into his own net and the advantage was doubled four minutes before half-time when a move of 30 passes ended with Diogo Jota heading in Andrew Robertson's superb cross.

Liverpool added Salah to their long list of absentees after he tested positive for Covid-19 in Egypt but the prolific Jota, signed from Wolves for £45m in September, once again stepped in - becoming the first player in the club's history to score in his first four competitive home appearances.

Leicester improved marginally in the second half but it was still Liverpool who dominated, Evans heading against his own post and both Roberto Firmino and Sadio Mane being denied by the woodwork and keeper Kasper Schmeichel.

Firmino was finally on target as he rose to send a fine header out of Schmeichel's reach four minutes from time to give Liverpool the victory margin their superiority deserved.

There was a sense before kick-off that a depleted Liverpool, and their unbeaten Premier League home record stretching back to 2017, might be vulnerable to the in-form Foxes. Not a bit of it.

Liverpool were rampant from the first whistle and barely gave Leicester City a chance to hit the form that has made them so impressive this season.

And in Jota, Klopp has added another potent threat to go with his long-established world-class attack of Firmino, Mane and Salah.

The Portuguese forward has settled in seamlessly at Anfield, making that piece of history with his goal, but Liverpool were impressive in all areas and the final scoreline could and should have been more emphatic.

Liverpool pinned Leicester in their own half virtually from the kick-off and rivals looking for any signs of potential weakness in the absence of so many key players would have been disappointed.

Klopp's side were right at the top of their game, taking a stranglehold Leicester never threatened to loosen apart from the moment when Harvey Barnes steered a great first-half chance wide with the score at 1-0.

Jose Mourinho, Pep Guardiola and Frank Lampard, among others, will harbour ambitions of taking Liverpool's crown. On this evidence, it will take some doing.

This was a big chance for Leicester City to make another powerful statement about their quality after impressive away victories this season at Manchester City, where they won 5-2, Arsenal and Leeds United.

Sadly, for manager Brendan Rodgers and his talented squad, they came up short here and ended up well beaten.

Leicester did not move the ball with their trademark speed and were unable to get Jamie Vardy, their most potent threat, into any dangerous areas. They looked shaky under a constant wave of Liverpool attacks.

The Foxes felt they were denied an early penalty when the ball struck Joel Matip's hand and Barnes wasted that glorious opportunity but in reality they never deserved anything and this was a chastening experience.

Leicester are a fine side who will have better days and nights in the season ahead but they were never in serious contention at any point.

'The problems will not get smaller'

Liverpool boss Jurgen Klopp, speaking to Match of the Day: "We scored three goals and didn't concede one; we defended exceptionally well, controlled the game.

"It's a tricky situation and when Naby [Keita] goes off with a muscle injury, you know the problems will not get smaller. The boys know when they are allowed to train with us they have the quality to do so. We don't give tickets for training - you have to qualify with talent and aptitude. It is a tough school, there a lot of steps to go.

"We have to make sure we recover but the Naby injury didn't help at all."

Leicester boss Brendan Rodgers speaking to Match of the Day: "In the first half in particular, we were too passive and defending the space, but didn't have enough contact and gave away poor goals.

"We had a good opportunity on the counter with Harvey Barnes, but overall when you are passive like that, your football is not quite the same. We weren't aggressive enough.

"Second half was a little bit better; we were more aggressive in our press, and that allows us to play better football. Liverpool deserved to win. The guys coming back from the international break were not as cohesive as what we have been.

"It's mentality - you have to get up to the ball. We were happy for them to have it in their own half, but as soon as it came into our territory, we were not as aggressive as I would like.

"Unlike the game last year, when we lost at home, this is a game we can reflect on easily and analyse and move on."