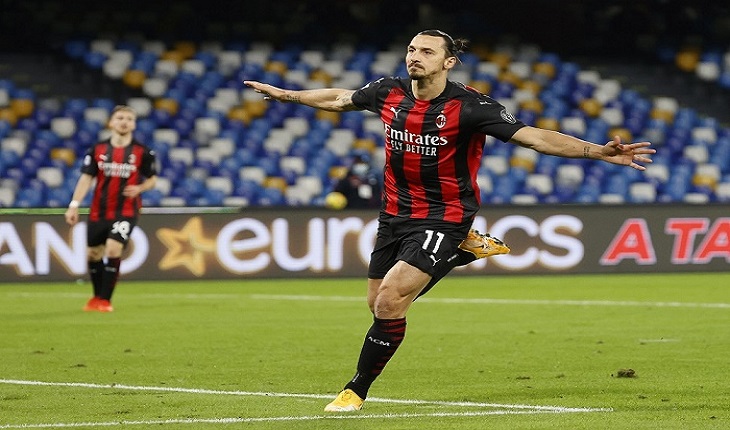 Zlatan Ibrahimovic scored twice to bring his tally to 10 league goals this season before limping off with a muscle strain as AC Milan stayed top in Serie A on Sunday with a 3-1 win at 10-man Napoli.

Milan move back two points ahead of Sassuolo -- 2-0 winners earlier at Hellas Verona -- with Roma third after Henrikh Mkhitaryan netted a brace in a dominant 3-0 win over Parma.

"For me Zlatan is stronger now than 10-12 years ago," said Napoli coach Gennaro Gattuso of his former Milan teammate.

"Milan strongly believes in Ibra, his teammates trust him 100 percent.

"In my opinion, their team is not the strongest but they have the mentality.

"We play well but lose as soon as it gets difficult."

Ibrahimovic continued his fine form, heading in a Theo Hernandez cross after 20 minutes, sending in the second with his knee nine minutes after the break.

But the 39-year-old pulled up clutching his left hamstring and was substituted after 79 minutes.

The Swede has scored in all six games he has played this season, having missed two after contracting coronavirus.

Coach Stefano Pioli missed the trip south with Covid-19, but his side got their first league win in Naples since October 2010, the season they last won the Scudetto, with Ibrahimovic also on the scoresheet that time.

Napoli played the final half an hour a man down after Tiemoue Bakayoko was sent off for two yellow cards, just after Dries Mertens had pulled a goal back for the hosts.

Norwegian Jens Petter Hauge completed the scoring five minutes into injury time, the 21-year-old getting his first Serie A goal.

Champions Juventus are fourth -- four points off top spot -- after winning 2-0 at Cagliari on Saturday.

Last season's runners-up Inter Milan are just behind in fifth, after a Romelu Lukaku double inspired a 4-2 comeback win over Torino, with Napoli dropping from third to sixth -- six points off top spot.

In Milan, Torino got off to a strong start despite playing without top striker Andrea Belotti who pulled up during the warm-up.

Simone Zaza took the skipper's place and scored the opener just before the break with Cristian Ansaldi adding a second from the penalty spot after an hour.

Inter reacted in the 64th minute, with Alexis Sanchez bundling the ball in after Lukaku's initial effort was tipped onto the crossbar, before the Chilean set up his fellow former Manchester United forward for the equaliser three minutes later.

Lukaku pulled Inter ahead from the penalty spot six minutes from time and then provided the cross for substitute Lautaro Martinez to score the fourth on 90 minutes.

"I didn't like what I saw," said Inter coach Antonio Conte three days before his side host Real Madrid in the Champions League.

"We lack the ferocity of last season.

"But we showed character as being 2-0 down could have destroyed us."

Torino drop into the relegation zone after their fifth defeat.

In Verona, Sassuolo continued their impressive run thanks to goals in either half from Jeremie Boga and Domenico Berardi.

The side from Emilia Romagna are unbeaten this season and are the joint top scorers with 20 goals.

Borja Mayoral got his first Serie A goal just before the half-hour mark, with Mkhitaryan adding two more before the break to bring his tally to five in two games after scoring a hat-trick last time out against Genoa.

In Tuscany, Cesare Prandelli had a nightmare start as coach of struggling Fiorentina with a 1-0 home defeat by Benevento.

Former Italy coach Prandelli returned to the 'Viola' a decade after leaving for the Azzurri job in 2010, but the team fell to their fourth defeat.

"The fragility worries me most," said Prandelli.

"Perhaps the team succumbed to their fears and negative thoughts when Franck came off."

Riccardo Improta scored his first Serie A goal for Benevento on 52 minutes, slotting in a Gabriele Moncini cross after a Cristiano Biraghi defensive error.

Fiorentina slip to 15th in the Serie A table, just behind Benevento.