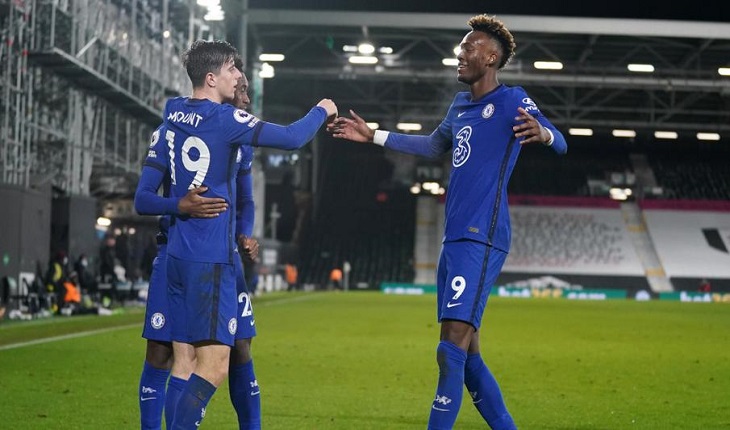 Mason Mount put Chelsea back on track with the late winner that sealed a vital 1-0 victory at 10-man Fulham, while Leicester moved up to second in the Premier League thanks to a 2-0 win over Southampton.

Chelsea boss Frank Lampard was under pressure after just one win and four defeats in their previous six matches that saw the Blues kick-off at Craven Cottage down in 10th.

But Chelsea got the break they needed when Fulham defender Antonee Robinson was sent off just before half-time for a rash challenge on Cesar Azpilicueta.

Lampard's men labored to make their numerical advantage count, but England midfielder Mount finally broke the deadlock in the 78th minute when he drilled home from 20 yards.

That was enough to seal Chelsea's first league victory since they beat West Ham just before Christmas and climb up to seventh.

"Of course it feels good to get a win, it has not been easy with the league form recently and you have to break the duck," Lampard said.

"I trust the quality of the players. There was a feeling we would get a goal because the pressure was constant. It was about staying patient with our passing and I think we did."

Fulham remain in the relegation zone after their first defeat in six league games.

Next up for Chelsea is a trip to Leicester on Tuesday with the Foxes enjoying another successful season under Brendan Rodgers.

Leicester closed to within a point of Manchester United at the top ahead of the Red Devils' blockbuster clash with champions Liverpool at Anfield on Sunday.

One moment of magic from Maddison made the difference against Southampton as he smashed high into the roof of the net from a narrow angle on 37 minutes.

The midfielder also remembered to adhere to new Premier League guidelines on goal celebrations as he mimicked handshakes and high-fives at a distance.

"If little things like that are required to keep football going that's what we need to do," said Maddison, after criticism from politicians over-exuberant celebrations while infection rates of coronavirus in England are soaring.

"Footballers get a lot of stick. It's nice to turn something like that into a lighter note because the whole country wants football to continue."

Stuart Armstrong struck the bar for Saints in the second-half, but the visitors badly missed the presence of top scorer Danny Ings up front, who was absent due to a positive Covid-19 test, as they missed the chance to leapfrog Chelsea and Tottenham.

Harvey Barnes then sealed the points for Leicester deep into stoppage time on the counter-attack.

At the bottom of the table, Sam Allardyce got his first victory as West Bromwich Albion boss in a 3-2 Black Country derby win over Wolves at Molineux.

Allardyce had failed to win any of his first five matches since replacing the sacked Slaven Bilic.

Matheus Pereira shot Albion ahead from the spot before goals from Fabio Silva and Willy Boly put Wolves in the driving seat at half-time.

Albion remain second bottom of the table, but are now just three points from safety.

"The lads were excellent in the second half, their heads could have gone down with the results we have had recently but they came bouncing back," said Allardyce.

Brighton also boosted their survival bid with a 1-0 win at Leeds.

Neal Maupay netted after 17 minutes with a tap-in after Alexis Mac Allister and Leandro Trossard combined to open up the Leeds defence.

Graham Potter's side are five points clear of the relegation zone after ending a nine-match winless run in the league.

West Ham closed to within three points of the top four after beating Burnley 1-0 at the London Stadium.

The decisive moment came in the ninth minute when Michail Antonio grabbed his first league goal since October from Pablo Fornals' cross.