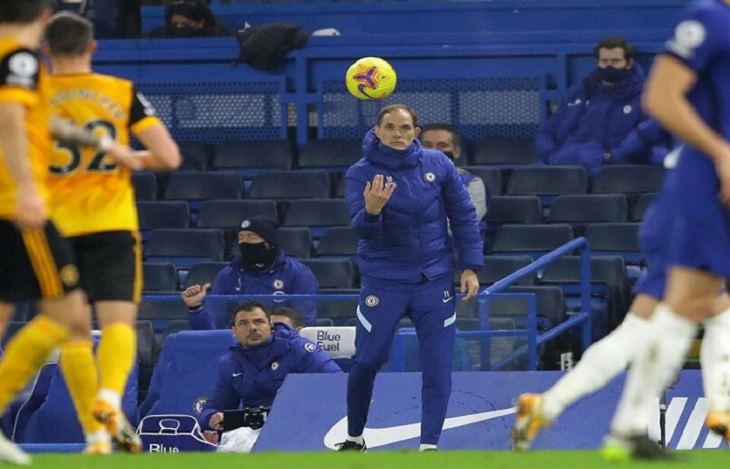 Tuchel's side delivered a labored display that bore many of the hallmarks of the dismal defeats that prompted Frank Lampard's sacking on Monday.

Chelsea controlled possession but could not find enough rhythm to break down stubborn Wolves at a rain-lashed Stamford Bridge.

It was an inauspicious start to the Tuchel era in west London, but the former Paris Saint-Germain and Borussia Dortmund boss believes he can reverse Chelsea's fortunes given time.

"I enjoyed it a lot because I was very happy with the intensity, the attitude, energy, and quality of my team," Tuchel said.

"We were well organized, had a lot of ball recoveries in the last third, and never lacked intensity.

"Unfortunately we couldn't score, but if we take care of our performances like this the results will come."

Chelsea has won just two of their last nine league matches and sit in eighth place, five points adrift of the top four.

Tuchel only took training with Chelsea's players for the first time on Tuesday evening after being appointed earlier in the day.

"I didn't expect it to be on this level from one training and two meetings," he said.

"We stepped up minute after minute in the second half. It gives me a good feeling for the future."

The 47-year-old has signed an 18-month contract to become the 11th full-time manager appointed by Roman Abramovich since he bought Chelsea in 2003.

Whether he lasts the duration of that deal -- Lampard only just made it to 18 months in charge -- remains to be seen.

There is no doubting the size of the task facing Tuchel, who was sacked by PSG in December after losing a power struggle with the French club's sporting director Leonardo.

All eyes were on Tuchel's first team-sheet and he made four changes from Lampard's last Premier League game at Leicester.

His first eye-catching decision was to leave out midfielder Mason Mount, who was one of Lampard's favorites.

Tuchel admitted he had opted for experience over youth as Jorginho, Olivier Giroud, Hakim Ziyech and Cesar Azpilicueta came in for Mount, Tammy Abraham, Reece James and Christian Pulisic.

Germany's Antonio Rudiger, who reportedly had a fractious relationship with Lampard, started at center-back, but his compatriot Timo Werner was among the substitutes after 11 league games without a goal.

Wrapped up in a thick Chelsea puffa jacket, Tuchel took his place on the bench while a Supporters Group banner reading 'In Frank We Trust, Then, Now and Forever' hung from the empty Shed End.

It was reported the banner, first used for Lampard's final match against Luton, would be taken down after Wolves' visit.

Tuchel's notoriously intense personality soon started to show as he waved his arms in frustration when Giroud failed to reach Callum Hudson-Odoi's cross in the opening moments.

The new-look Chelsea had plenty of possession but, as was often the case under Lampard, they lacked a cutting edge.

Tuchel sprang to his feet to bark orders from the touchline as Chelsea struggled to break down the well-drilled Wolves defense.

Chelsea made 433 successful passes in the first half -- their most in the opening period of a Premier League game since 2003-04.

But they were too ponderous to take advantage of that territorial dominance and it was a similar story after the interval.

Wolves nearly caught Tuchel's men with a sucker punch as Pedro Neto ran onto Daniel Podence's flick and raced into the Chelsea area before clipping a shot over Edouard Mendy and onto the crossbar.

Mount's introduction in the closing stages gave Chelsea some momentum and the midfielder teed up Hudson-Odoi to test Rui Patricio.

If Lampard could bring himself to watch, he would have had a wry smile as Mount nearly won it in the final moments with a powerful effort turned away by Patricio.