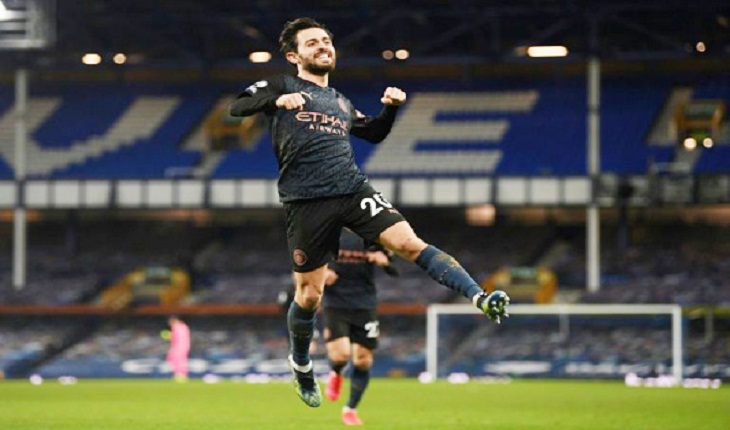 As Manchester City power towards the Premier League title, the question is not whether Arsenal can stall the leaders, but is this Pep Guardiola’s finest achievement in his Etihad reign?

Liverpool was expected to push City all the way but the champions have stumbled so badly that their only concern going into the Merseyside derby against Everton is getting back into the top four.

When the final whistle blew on Manchester City’s 17th successive victory in all competitions, Pep Guardiola was one step closer to the most impressive feat of his five years in the Premier League.

They are the first English top-flight side to begin a calendar year with 10 successive league wins.

But finding a way to navigate through City’s poor start to the season while also dealing with the loss of all-time leading scorer Sergio Aguero for most of the campaign and a significant Covid-19 outbreak in the camp burnishes his legacy.

Guardiola’s astute tactical tweaks have been key to the revival, but he knows the dangers of resting on his laurels during a hectic program.

“Winning 10 straight games at the start of the calendar year is nice but next is Arsenal,” he said. “It’s better you don’t see the schedule, otherwise you get depressed. But at the same time, it’s a beautiful challenge.”

Van Dijk has not played since suffering knee damage after an ugly challenge from Everton keeper Jordan Pickford during that 2-2 draw in October.

The absence of the imperious Dutch center-back has been the most obvious reason for Liverpool’s unexpected collapse as they lost their long unbeaten home league record and fell out of the title race.

Ravaged by injuries and suffering from burnout after their first title in 30 years, Liverpool and their manager Jurgen Klopp look so overwrought that rumors circulated after last weekend’s loss at Leicester that the German was ready to resign.

Klopp brushed that off and Liverpool took a small step on the road to recovery when they won 2-0 against Leipzig in the first leg of their Champions League last-16 tie on Tuesday.

Will the chance to avenge that season-defining meeting earlier this season re-light their fire or can Everton deal another blow to their rivals’ top-four hopes?

After three successive league defeats, a cautious Klopp said: “We are not children anymore, so we don’t think everything is fine because we won one game. It is much more important that we played good football again.”

Thomas Tuchel is enjoying a blissful honeymoon period as Chelsea’s manager prepares to take his team to misfire Southampton looking for a sixth consecutive victory.

Every manager who marries his fortunes to Chelsea’s demanding owner Roman Abramovich eventually gets divorce papers, but for now, Tuchel is defying his reputation as a combative personality capable of starting a fight in an empty room.

The former Paris Saint-Germain boss, who replaced Frank Lampard in January, has won over his new players by offering a clean slate to some who had been exiled by his predecessor while impressing others with astute game-plans and rigorous training methods.

The results have been immediate, with Chelsea back up to fourth after going unbeaten in Tuchel’s six matches in all competitions.