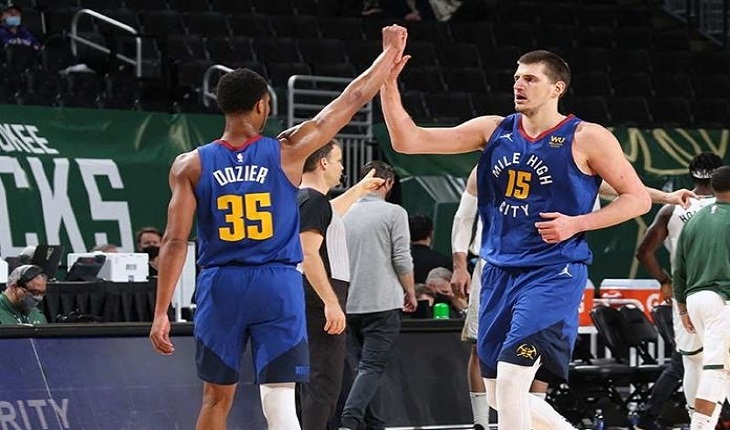 Nikola Jokic bagged the 50th regular-season triple-double of his career as the Denver Nuggets halted the Milwaukee Bucks’ five-game winning streak with a 128-97 drubbing on Tuesday.

Serbian star Jokic dominated a one-sided encounter at Milwaukee’s Fiserv Forum as Denver never looked back after taking the lead midway through the first quarter before romping to victory.

Jokic’s ninth triple of the season included 37 points, 11 assists, and 10 rebounds while Jamal Murray added 24 points for the visitors.

The Nuggets improved to 20-15 with the win while the Bucks fell to 21-14 following the loss to remain third in the Eastern Conference.

Giannis Antetokounmpo led the Bucks scorers with 27 points, but the home side was always struggling to get in the game after conceding a 37-23 lead at the end of the first quarter.

Elsewhere Tuesday, Kemba Walker scored 25 points as the Boston Celtics rolled to a third straight win with a 117-112 victory over the Los Angeles Clippers.

Paul George led the scorers for Los Angeles with 32 points while Reggie Jackson — a late replacement for Leonard — added 25 for the visitors.

The Clippers suffered a blow earlier Tuesday when Leonard was ruled out after complaining of back spasms.

Boston improved to 18-17 with the victory, leaving them in fifth place in the Eastern Conference table. The Clippers fell to 24-13 with the loss and remain fourth in the West.

Celtics coach Brad Stevens expressed satisfaction at the way his team had responded after a rocky spell preceding their current winning streak when they lost three games on the bounce.

“The team has stayed together when they easily could have been pulled apart by the noise,” Stevens said. “You have to be able to resist that at this level when you’re going through the roller coaster of the season.” The Celtics had also benefited from a run of home games, Stevens added.

“We’ve slept in our beds for five straight days,” Stevens said. “We’re fresher. We just look better. We look more like ourselves.”

In Miami, a late burst of scoring from Trae Young gave interim Atlanta Hawks coach Nate McMillan a winning debut over the Miami Heat, 24 hours after the dismissal of Lloyd Pierce on Monday.

Pierce was sacked in the wake of Atlanta’s loss to Miami on Sunday, but his unsettled squad responded with a battling 94-80 win over last season’s NBA Finals runners-up.

Young was pivotal in the win, rattling off 13 consecutive points in the fourth quarter to guide Atlanta to victory.

“The fourth quarter is when I gotta make plays,” Young said. “Tonight I just wanted to close the game out and get a win for us … Everybody had a hell of a game. It was a great team win for us.”