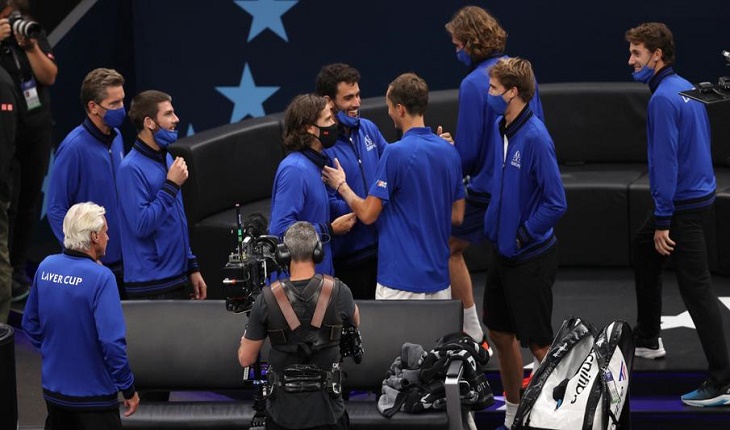 Newly-crowned US Open champion Daniil Medvedev cruised past Canada's Denis Shapovalov 6-4, 6-0 in the 2021 Laver Cup on Saturday, as Team Europe continued its march towards a fourth straight title.

"I didn't know what to expect because, after the US Open, I didn't play for a week-and-a-half.

"I came here, practiced as much as I could the last three days. I didn't hit many balls but, surprisingly, I was feeling good," he added.

"At first, it was not easy. The ball was not going as fast as I wanted. He was playing really well. Then I just couldn't miss a ball anymore."

Unless a miracle happens, Team Europe is on track to claim its fourth consecutive title after previous wins in 2019 (Geneva), 2018 (Chicago), and 2017 (Prague).

"We haven't won yet but it is looking good," said Team Europe captain and 11-time Grand Slam winner Bjorn Borg

The Laver Cup pits six top European players against six of their counterparts from the rest of the world.

The event is played over three days. Each day four matches are played -- three singles and a double -- with the first team to reach 13 points declared the winner. Each win will be worth three points on Sunday.

Earlier this month Medvedev captured his first major title at the US Open with a 6-4, 6-4, 6-4 win over Novak Djokovic, dashing the Serb's hopes of becoming the first calendar-year Grand Slam winner since 1969.

Russia's Medvedev broke the 12th-ranked Shapovalov to open the second set and then won nine straight to clinch the lop-sided victory and extend their points lead to eight.