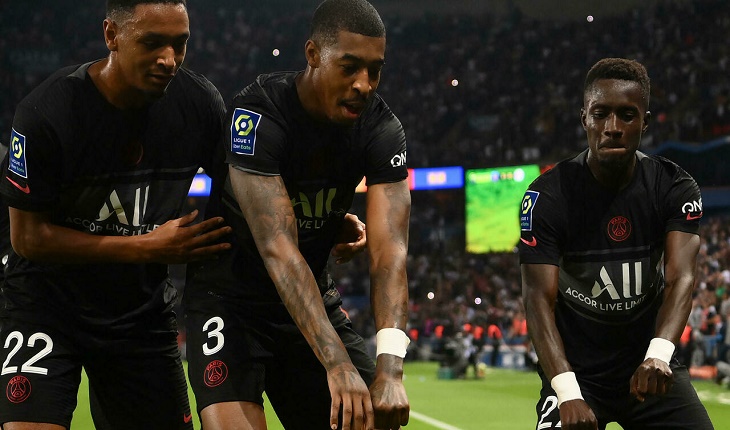 Lionel Messi was again sidelined for Paris Saint-Germain and in the Argentine's absence, it was Idrissa Gana Gueye and Julian Draxler who scored as the Ligue 1 leaders beat Montpellier 2-0 on Saturday.

Senegal midfielder Gueye crashed a shot into the roof of the net from 20 meters to give PSG an early lead at the Parc des Princes and substitute Draxler added a late second as Mauricio Pochettino's team maintained their perfect start to the French season.

They have won eight matches out of eight in Ligue 1 and are already 10 points clear of second-placed Marseille, who do nevertheless have two games in hand.

However, this was once again a far from completely convincing performance from PSG, who in the last week had scored stoppage-time goals to claim respective 2-1 wins against Lyon and struggling Metz.

"I don't know if this was a perfect evening but it was a good evening. Eight matches, eight victories," said Pochettino.

His side host Manchester City in the Champions League on Tuesday looking for revenge for their defeat at the hands of Pep Guardiola's side in last season's semi-finals.

"The Champions League is such an important objective for this club that it's best to prepare for it by winning and avoiding any more injuries," Pochettino added.

The hope is that Messi will be able to play in that match after he sat out a second straight game for PSG with the knee problem that led to him being substituted against Lyon.

Messi has made just three appearances for the Qatar-owned club since arriving from Barcelona in early August, playing a total of 190 minutes.

Not that PSG -- wearing their black and grey third kit -- were short on attacking options, with Neymar, Kylian Mbappe, and Angel di Maria all playing but failing to find the net.

Neymar clipped an effort onto the top of the bar early on and Mbappe was denied by Montpellier goalkeeper Jonas Omlin before Di Maria set up Gueye for the opener in the 14th minute.

His superb left-foot strike was already his third goal this season, as many as he managed in the last two campaigns combined.

Ander Herrera's sliced half-volley came off the bar just before half-time and PSG was surprisingly flat after the break, although they did have chances to add to their lead.

The second goal only arrived in the 89th minute when Draxler, just on as a substitute, collected a Neymar pass with his first touch of the game and fired in a low shot with his second.

- David's remarkable record -
Meanwhile, Lyon was held to a 1-1 draw at home by Lorient after playing most of the game with 10 men following the sending-off of Italian international defender Emerson Palmieri inside the first 15 minutes.

Armand Lauriente's stunning free-kick put Lorient ahead but Karl Toko-Ekambi equalized five minutes after the break for Lyon, who with 12 points are already 12 points behind PSG.

Lille has won every single Ligue 1 game in which their Canadian star Jonathan David has found the net, a remarkable record that continued as his brace secured a 2-1 victory at Strasbourg.

David converted from a Timothy Weah cutback to open the scoring midway through the first half and he then netted a penalty in the 57th minute after United States international Weah was brought down in the box.

Ibrahima Sissoko pulled a goal back for Strasbourg but they had Adrien Thomasson sent off as they finished the game in Alsace with 10 men.

It is a second straight win for reigning champions Lille, who go to Austria to play Red Bull Salzburg in the Champions League in midweek.

David, who was born in New York, scored 13 goals for Lille last season after signing from Belgian club Gent.

His team won all 11 matches in which he found the net as they pipped PSG to the title.

Their three wins so far in this campaign have come when the 21-year-old has been on target.

Nice moved provisionally up to third after a 3-0 defeat of winless Saint-Etienne, who are now bottom of the table.

Deprived of Neymar, PSG look to Pochettino to take down old foe Barcelona

Neymar says he wants to stay at PSG