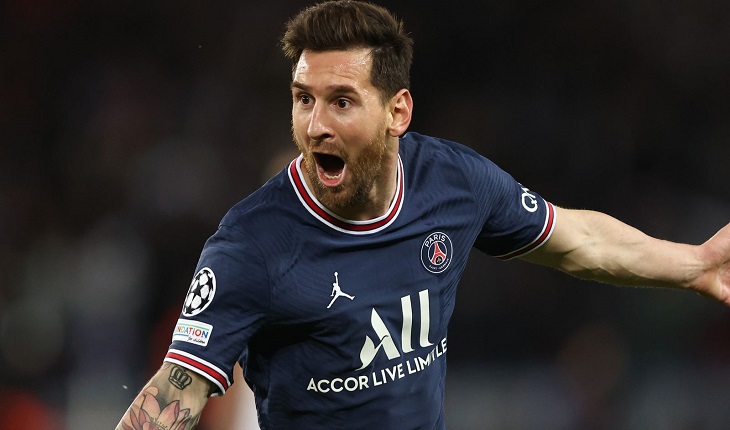 It was the moment the fans had really been waiting for ever since Lionel Messi was unveiled as a Paris Saint-Germain player nearly two months ago.

The Argentine had featured only fleetingly for his new club and had not scored a goal, but he chose his moment to get off the mark in Tuesday's heavyweight Champions League clash with Manchester City.

It was a trademark strike by the Argentine that put PSG 2-0 up against Pep Guardiola's side in the 74th minute, securing a victory that sends out a message to the rest of Europe, even this early in the season.

The six-time Ballon d'Or winner was having a quiet evening until he collected possession just inside the City half near the right touchline and scampered towards goal.

He held off Aymeric Laporte and played a one-two with Kylian Mbappe before sending a shot high into the net from just outside the box.

Guardiola -- who has been on the receiving end of Messi's magic before against Barcelona with Bayern Munich and with City -- called his former pupil
"unstoppable".

"I don't usually celebrate goals, but that one I did," said PSG coach Mauricio Pochettino, who came up against Messi in Spain as coach of Espanyol.

"I have seen him score plenty of times before when I was on the opposition bench, so for once I was on the right bench and could celebrate."

Messi left Barcelona as their all-time top scorer with 672 goals in 778 appearances, a record tally for one club.

Now he is up and running in Paris and the crowd at the Parc des Princes, who will not forget their evening, will hope it was just the first goal of many.

"It is true that I was becoming desperate to get my first goal," Messi, who was making just his fourth appearance for Pochettino's side, told Canal Plus.

The 34-year-old came to Paris with his sights firmly set on winning the Champions League, a trophy he last won with Barcelona in 2015.

- 'MNM' getting to know each other -
A team containing Messi, Mbappe and Neymar -- not to mention Angel Di Maria, who was suspended on Tuesday -- can target nothing less than victory in a competition PSG have never won.

The early signs this season have not always been promising, with PSG drawing 1-1 at Club Brugge in their first European game and facing largely limited opposition on the way to eight wins out of eight in Ligue 1.

But Messi believes his relationship with Mbappe and Neymar, the so-called 'MNM', is developing.

"As we go along we are getting to know each other better," he said.

Pochettino admitted his team "suffered" at times, especially when Raheem Sterling and Bernardo Silva hit the bar in quick succession for City in the first half.

It is the first time Qatar-owned PSG have ever beaten Abu Dhabi-backed City, having been on the losing side in the quarter-finals in 2016 and then in last season's semi-finals.

City are now a point behind the Parisians, and Club Brugge, in their Champions League group, but the two leading financial powers of the modern European game will still surely both advance to the last 16.

Guardiola will be glad he does not have to worry about playing against Messi again until the reverse fixture in November, yet in many ways this was the least important match of the week for City.

Winners at Chelsea on Saturday in a repeat of last season's Champions League final, Guardiola's side now have the small matter of a trip to Premier League leaders Liverpool to come this weekend.

"We played a good game with personality but we couldn't score a goal," Guardiola said.