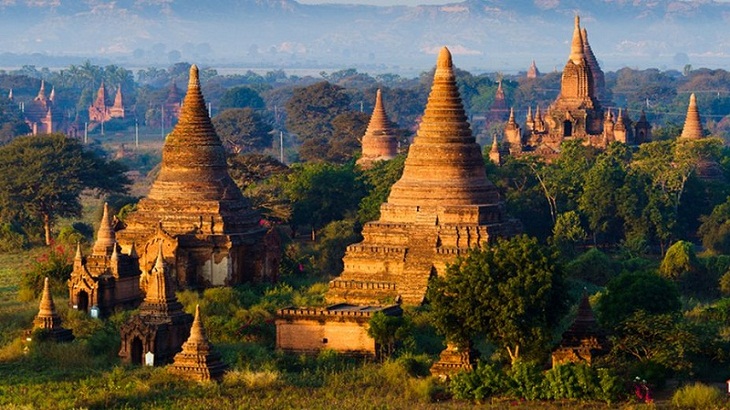 Where in the world can you see thousands of religious edifices and pagodas in one corner of a region. Here it is, Bagan, the ancient religious city of Myanmar where Buddhism flourished.

Still flourishing with thousands of Buddhist stupas, temples and monasteries, it is a beautiful wonder of a place. You can see age-old structures stand tall and splendid amid the dense and green forested region. It looks like a little paradise of a godly kingdom.

Over 10,000 Buddhist temples, pagodas and monasteries once stood in the city built by the descendants of Pyu, long before some of them fell to ruins. They were constructed by the royal families and the people around Bagan and Nyong. Now, it is said that there are over 3,000 of these religious edifices and pagodas in the Bagan Archaeological Zone. Unique murals adorn the interior walls of the religious edifices.

This vast archaeological zone was expanded from 42 to 62 square miles, according to the Department of Archaeology there.

Located in an earthquake-prone zone, a 6.8-magnitude earthquake rocked the city last August and destroyed some edifices and pagodas. Since 1904, over 400 earthquakes have jolted the city and damaged many structures there. While restoration works are being carried out by experts, Myanmar is making strong efforts to enlist the city Bagan in Mandalay region, as a World Cultural Heritage site.

If visiting pogadas tops your travel list, Bagan is a must-visit. Surrounded by the Rakhine Yoma mountain range, the city is the main tourist attraction to the country today.

The other ancient cities of Pyu in Myanmar you may visit are Hanlin, Beikthano and Sri Kestra. The three cities were selected as cultural heritage sites way back in June 2014.

Steps taken for smooth travel to home on Eid-ul-Fitr: PM