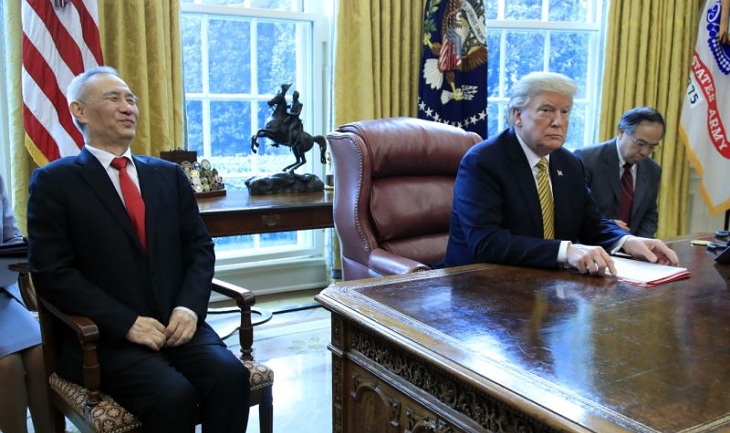 President Donald Trump said Thursday that the U.S. and China are "rounding the turn" in a lengthy negotiation over trade and predicted that "something monumental" for both countries could be announced in a matter of weeks.

"We have a ways to go but not very far," Trump said during an Oval Office appearance with both countries' negotiating teams.

Vice Premier Liu He, China's top trade negotiator, agreed, telling Trump that "because of your direct involvement, we do have great progress." The talks resume Friday.

China and the U.S. are working to end a standoff that has shaken financial markets and darkened the outlook for the world economy.

The U.S. and Chinese negotiators on Wednesday began their ninth round of talks to resolve the dispute over American allegations that Beijing is using predatory tactics in a campaign to challenge U.S. technological dominance. China has denied the allegations. These tactics, the U.S. says, include cybertheft and forcing American companies to turn over trade secrets in exchange for access to the Chinese market.

Trump has slapped tariffs on $250 billion in Chinese products. In retaliation, China has targeted $110 billion in American imports.

The two countries have made considerable progress on the issues that divide them. China, for example, last month passed a law that loosens restrictions on foreign investment and aims to prevent Chinese officials from forcing foreign firms to hand over technology. Beijing is also expected to agree to sharply increase purchases of U.S. goods, putting a dent in America's massive trade deficit with China, which came to a record $379 billion last year.

The U.S. has "already gotten concessions that probably go beyond what China has been willing to do in the past," said Erin Ennis, senior vice president at the U.S.-China Business Council.

Still, analysts say the talks are unlikely to end long-standing tensions between America's mostly open, capitalist economy and a Chinese economy in which the Communist Party and the central government play a dominant role.

"The optimism about prospects for a looming deal has run into the reality that a gulf still exists between the two sides on a range of key issues," said Eswar Prasad, a Cornell University economist and former head of the International Monetary Fund's China division.

The two countries are still sparring, for instance, over ways to make sure that China lives up to its commitments and whether the United States would keep tariffs on Chinese imports to maintain leverage over Beijing. Trump said Thursday that he'd discuss the future of tariffs with Liu.

Still, Trump said, "We've agreed to far more than we have left to agree to."

The president also said he still wants to meet with Chinese President Xi Jinping. "If we have a deal, then we're going to have a summit," Trump said.

Economic forecasters at the World Bank, the International Monetary Fund and elsewhere have downgraded the outlook for the global economy, saying the U.S.-China standoff is reducing trade and creating uncertainty for businesses trying to decide where to make investments.