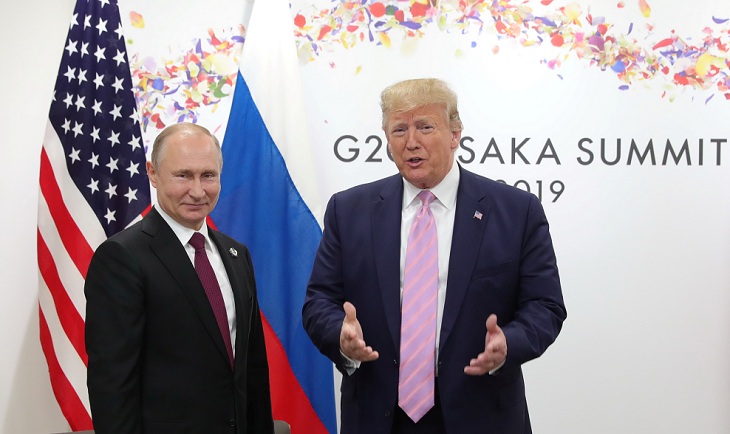 Delegations from the U.S. and Russia are expected to meet this week to discuss arms control and the possibility of coaxing China into negotiating a new, three-way nuclear weapons pact, two senior administration officials said Monday.

The New START treaty, the last major arms-control treaty remaining between the U.S. and Russia, expires in 2021. There has been talk of negotiating an extension to the existing treaty, but the White House thinks the next generation of arms control must include China.

New START restricts both the U.S. and Russia to 1,550 deployed strategic nuclear warheads on a maximum of 700 deployed intercontinental ballistic missiles and strategic bombers.

Daryl Kimball, director of the Arms Control Association, has advocated for a five-year extension of New START, saying there is no chance a new agreement adding China can be negotiated before the treaty expires in 2021.

"It would malpractice to discard New START in the hopes of negotiating a more comprehensive, ambitious nuclear arms control agreement with Russia and China and getting it ratified and into force," according to Kimball, who accuses the Trump administration of dithering for more than a year before beginning talks.

Before the Group of 20 summit last month in Japan, Russian President Vladimir Putin said he planned to push President Donald Trump for an extension to New START. Putin said his nation was ready to agree to an extension, but that Russia had not seen any initiative from the Americans even though the treaty expires in 2021.

At the same time, Russia also has expressed an interest in multilateral arms control deals, according to one of the administration officials, who spoke on condition of anonymity to discuss the issue ahead of the talks Wednesday in Geneva.

The senior administration officials said any comprehensive dialogue about the thorny issues of arms control has been made difficult by a series of actions by Moscow: interfering in the 2016 U.S. presidential election, poisoning a former spy and his daughter in Britain, capping the size of the U.S. Embassy in Russia, and seizing Ukrainian vessels.

John Sullivan, deputy secretary of state, will lead the American delegation comprising officials from the State Department, National Security Council, Defense Department, Joint Chiefs of Staff and the National Security Agency. The eight or nine members of the U.S. team will meet with a similar-size delegation from Russia led by Russian Deputy Foreign Minister Sergei Ryabkov.

The latest talks are being held just months after the Trump administration pulled the plug on a separate nuclear arms treaty with Russia. Washington accused Moscow of violating the 1987 Intermediate-Range Nuclear Forces treaty with "impunity" by deploying banned missiles. Moscow denied it was in violation and has accused the United States of resisting its efforts to resolve the dispute.

Democrats in Congress and some arms control advocates criticized Trump's decision as opening the door to an arms race, but Trump said the United States cannot be the only country in the world unilaterally bound by the treaty.

China's military has grown significantly since the late 1980s and the pact had prevented the U.S. from deploying weapons to counter some of those being developed in Beijing.

Iran says ready to negotiate if US lifts sanctions