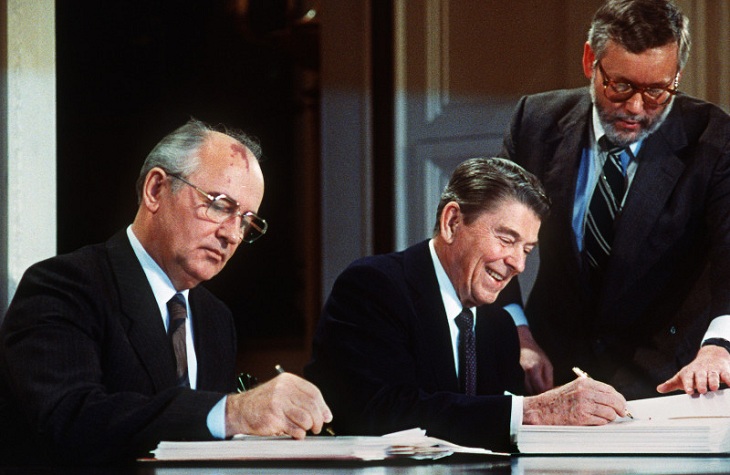 The United States formally withdrew from a landmark 1987 nuclear missile pact with Russia on Friday after determining that Moscow was violating the treaty, an accusation the Kremlin has denied.

Washington signaled it would pull out of the arms control treaty six months ago unless Moscow stuck to the accord. Russia called the move a ploy to exit a pact that the United States wanted to leave anyway in order to develop new missiles.

President Donald Trump told reporters he would like to seal a new arms deal with Russia reducing all nuclear forces, and possibly with China as well.

"If we could get a pact where they reduce and we reduce nuclear, that would be a good thing for the world. I do believe that will happen," Trump said.

The Intermediate-range Nuclear Forces Treaty (INF) was negotiated by then-US president Ronald Reagan and Soviet leader Mikhail Gorbachev. It banned land-based missiles with a range of between 310 and 3,400 miles (500-5,500 km), reducing the ability of both countries to launch a nuclear strike on short notice.

The dispute is aggravating the worst US-Russia friction since the Cold War ended in 1991. Some experts believe the treaty's collapse could undermine other arms control agreements and speed an erosion of the global system designed to block the spread of nuclear arms.

"The United States will not remain party to a treaty that is deliberately violated by Russia," Secretary of State Mike Pompeo said in a statement.

"Russia's non-compliance under the treaty jeopardises US supreme interests as Russia's development and fielding of a treaty-violating missile system represents a direct threat to the United States and our allies and partners," Pompeo said.

Senior Trump administration officials, who spoke on condition of anonymity, said Russia had deployed "multiple battalions" of a cruise missile throughout Russia in violation of the pact, including in western Russia, "with the ability to strike critical European targets."

Russia denies the allegation, saying the missile's range puts it outside the treaty. It rejected a US demand to destroy the new missile, the Novator 9M729, known as the SSC-8 by the NATO Western military alliance.

Moscow has told Washington the US decision to quit the pact undermines global security and removes a key pillar of international arms control.

"The United States is saying China should be a party in this disarmament agreement, but I think everybody knows that China is not at the same level with the United States and the Russian Federation," he said.

Russia said on Friday it had asked the United States for a moratorium on the deployment of land-based short and intermediate-range nuclear missiles.

"A serious mistake has been made in Washington," Russia's Ministry of Foreign Affairs said in a statement.

"We have already introduced a unilateral moratorium and won’t deploy land-based short or medium-range missiles, if we get them, in regions where such US missiles are not deployed," it said.

President Vladimir Putin has said Russia does not want an arms race and he has promised he would not deploy Russian missiles unless the United States does so first.

However, should Washington take such a step, he has said he would be forced to deploy Russian hypersonic nuclear missiles on ships or submarines near US territorial waters.

NATO Secretary-General Jens Stoltenberg dismissed Russia's moratorium request on Friday, saying it was "not a credible offer" as he said Moscow had already deployed illegal missiles.

"There are no new US missiles, no new NATO missiles in Europe, but there are more and more new Russian missiles," he said.

NATO said it had agreed a defensive package of measures to deter Russia. That response would be measured and would only involve conventional weapons, it said.

NATO's Stoltenberg said there would be "no rash moves" by the alliance which he said "would not mirror what Russia does."

European officials had voiced concern that if the treaty collapses, Europe could again become an arena for a nuclear-armed, intermediate-range missile buildup by the United States and Russia.

US officials said the United States was months away from the first flight tests of an American intermediate-range missile that would serve as a counter to the Russians. Any deployment would be years away, they said.

"We are just at the stage of looking at how we might further the development of conventional options," one official said.