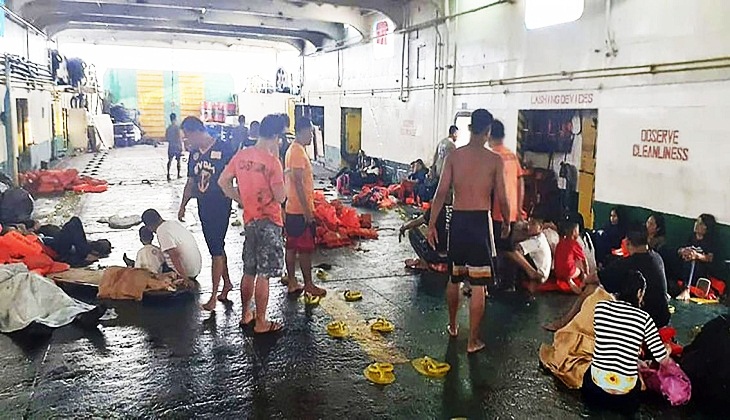 Fishing boats and passing ships rescued 245 people from a burning ferry overnight in southern Philippine waters, and the coast guard was still searching Wednesday though it wasn't clear if anyone was missing. A 1-year-old girl and two other people died.

The ship's manifest had 36 crewmembers and 136 passengers, 28 of them children, and the coast guard said investigators would ask the ferry owner and skipper to explain the discrepancy between the listed occupants and the number rescued.

Photos showed passengers wearing orange life vests waiting to be rescued at the loading bay of the ferry, which also carried some vehicles. Local news reports quoted some passengers as saying they jumped into the choppy waters in panic and were rescued by passing cargo and fishing vessels.

"We did not have any patrol ship in the area, so we alerted nearby ships and boats to render assistance because it was an emergency," coast guard spokesman Armand Balilo said by phone. "It's good that a number of ships immediately responded. We have to recognize what they did."

The fire apparently started in the engine room. Orange flames and smoke consumed almost the entire vessel but the M/V Lite Ferry 16 stayed afloat, about 3 kilometers (1.8 miles) off a port in Dapitan city of Zamboanga del Norte province, where it was heading after departing Santander town in central Cebu province Tuesday.

Search and rescue efforts were continuing, Balilo said around midday. It was unclear whether there were still people missing but no relatives have approached authorities to report any, and an ongoing search will continue, Balilo said.

A 1-year-old girl, a 60-year-old male passenger and a third person died, Balilo said. He did not have more details on the identity of the third person and the causes of their deaths.

Meanwhile, in the northern Philippines, ferries were warned not to go to sea after a fast-moving storm blew across the main island of Luzon overnight. Heavy rains fell in northern provinces, but no casualties or major damage was reported, and the storm has weakened into a tropical depression.

Sea accidents are common in the Philippine archipelago because of frequent storms, badly maintained boats, overcrowding and weak enforcement of safety regulations. In December 1987, the ferry Dona Paz sank after colliding with a fuel tanker in the Philippines, killing more than 4,341 people in the world's worst peacetime maritime disaster.