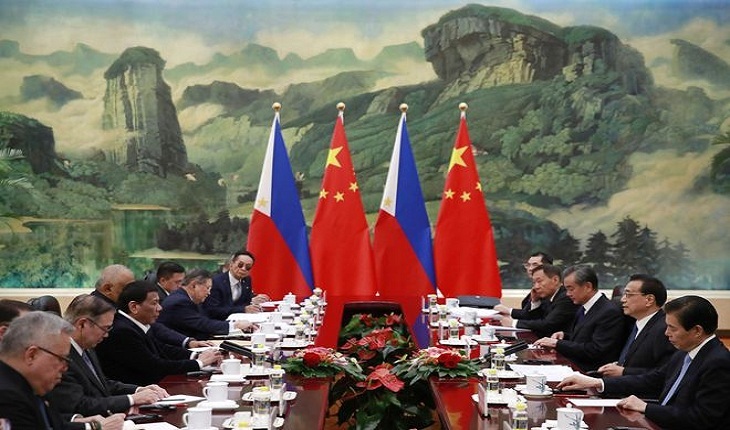 Chinese President Xi Jinping told his Philippine counterpart that Beijing will not recognize an international arbitration ruling that has invalidated most of China's claims to virtually the entire South China Sea, the Philippine leader's spokesman said.

The row over the disputed waters a major global shipping route thought to be rich in oil and gas reserves has for years marred China's relationship with the Philippines and other neighboring countries with rival territorial claims. Beijing has transformed a string of disputed reefs into missile-protected island bases.

Philippine President Rodrigo Duterte has largely avoided the subject in favor of seeking warmer ties with Beijing. But under domestic pressure, Duterte raised the issue in talks with Xi in Beijing this week, Duterte spokesman Salvador Panelo said in a statement Friday.

Duterte told Xi that the 2016 ruling of an international arbitration panel in The Hague, in which China had refused to participate, "is final, binding and not subject to appeal."

"In response, President Xi reiterated his government's position of not recognizing the arbitral ruling as well as not budging from its position," Panelo said.

"Both President Duterte and President Xi agreed that while their variant positions will have to remain, their differences however need not derail nor diminish the amity between the two countries," he added.

He said that Duterte raised the possible joint exploration of resources between the Philippines and China, and both leaders agreed on the importance of self-restraint and respect of freedom of navigation.

Philippine Defense Secretary Delfin Lorenzana asked Beijing earlier this month to explain the activities of Chinese research vessels and warships in what the Philippines claims as its waters, and accused China of "bullying."

Lorenzana said China did not ask for permission to send several warships through the Sibutu Strait at the southern tip of the Philippine archipelago on four occasions between February and July. He said two Chinese research ships have also been operating in the Philippines' exclusive economic zone.