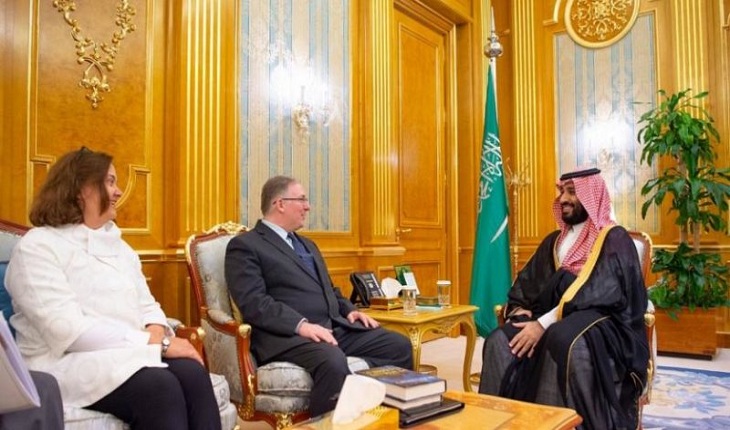 Saudi Crown Prince Mohammed bin Salman met Tuesday with a delegation of American evangelical Christians in the Red Sea city of Jiddah as the kingdom works to forge closer ties with an influential electoral base in the US that could be crucial to the 2020 elections.

The visit comes the same week two US senators met with the crown prince in the first such visit by members of Congress in more than a year. The prince continues to face fierce bipartisan criticism in the U.S. over the murder of Saudi critic and Washington Post columnist Jamal Khashoggi in the Saudi consulate in Turkey last year, despite denials by the kingdom that he had any involvement.

Prince Mohammed's meeting with prominent Christian figures marks only the second such visit by American evangelicals to the kingdom, which is trying to shake off its reputation for religious intolerance and human rights abuses.

For the crown prince and other Arab leaders, meetings such as this offer an opportunity to strengthen ties with the Trump administration through his evangelical base of supporters.

For the evangelical visitors, it is an opportunity for interreligious dialogue and to push for greater Arab support for the state of Israel.

Many U.S. evangelicals support Israel as a core part of their faith. Most believe that before Jesus can return and rule, Jews must return to the Holy Land and rebuild the Jewish Temple in Jerusalem, also the site of Islam's sacred Al-Aqsa Mosque compound.

The Saudi government published photos of the meeting, which was attended by leading American Christian Zionist leaders, including dual U.S.-Israeli national Joel Rosenberg.

A brief statement issued by the Saudi Embassy in Washington said the two sides discussed promoting coexistence and combating extremism.

In an email response to The Associated Press, Rosenberg said each person in the delegation traveled to Saudi Arabia in an individual capacity and that the group had meetings with a range of officials on Monday and Tuesday, with plans for more meetings on Wednesday. Traveling by motorcade, they had meetings with U.S. Ambassador John Abizaid, Saudi Arabia's ambassador to Yemen, and flew to the ancient Saudi site of Al-Ula for a tour.

The delegation, led by Rosenberg, said in a statement its members were grateful to have deepening relationships in Saudi Arabia "to talk openly, if sometimes privately, about what we believe must change in the kingdom even as we celebrate the kingdom's progress in so many other areas."

They said they were "stunned to learn" only two U.S. senators had visited Saudi Arabia this year, describing the kingdom as one of America's "most important strategic allies" and urged more senators to visit and ask the crown prince candid questions "rather than sniping at him from Washington."

Independent Sen. Angus King and Republican Sen. Todd Young met with Prince Mohammed on Sunday in Saudi Arabia. King told AP that the visit was aimed at doing a lot of listening and getting some answers from the crown prince.

"Both by his demeanor and his language, he knows that he has a problem and he gave us reassurances that the people responsible for the death of Khashoggi are going to be brought to justice," said King, who sits on the committees on intelligence and the military.

He said Prince Mohammed is also aware of the problem of civilian deaths in the war in Yemen, now in its fifth year.

"Words are important, but I'm interested in seeing actions and we'll see whether they follow through," King said.

Bangladeshi student shot dead in US