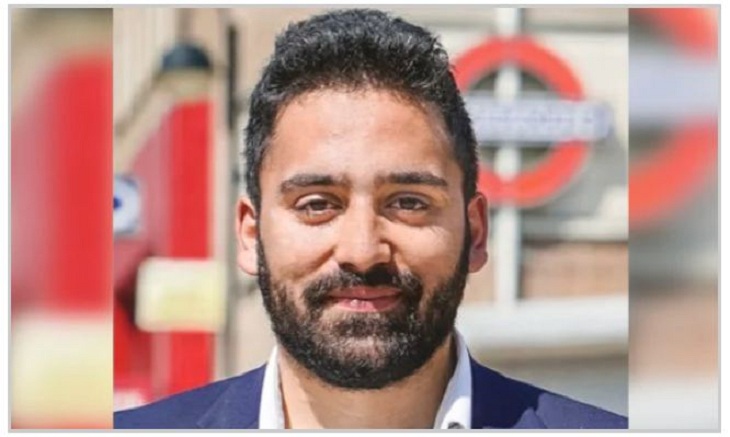 British Prime Minister Boris Johnson on Wednesday launched his Conservative Party's campaign for the general election. But there's a hitch. Johnson has to win back his own seat - fending off a challenge from a young Muslim immigrant who represents the Labour Party. It looks as if it could be a tight race.

Johnson represents Uxbridge, a suburb of northwest London and no longer the safe seat for Tories it was a decade ago. In the last general election, in 2017, Johnson won his race by just 5,034 votes. If Labour can swing 5% of the electorate its way, the prime minister could be in trouble.

British lawmakers don't have to live in the districts - or constituencies - they represent, and Johnson doesn't live in Uxbridge, though he makes occasional meet-and-greet appearances.

That makes him vulnerable, said Ali Milani, 25, the Labour challenger, who touts his credentials as a local. Milani lives in Uxbridge and went to Brunel University (where he was a student leader). He said Johnson's failure to stop a third runway at Heathrow international airport - he had pledged to lie down in front of the bulldozers - will also hurt the prime minister.

On Tuesday night, Milani went door-to-door in the South Ruislip neighborhood, urging people to toss Johnson out. More than a hundred activists joined him in the canvassing.

"This is a historic election right here. This could be the very first time we unseat a sitting prime minister. Right here, we have the power to stop Boris Johnson," Milani said as he rang doorbells, trailed by photographers and camera crews.

Johnson has until Nov. 14 to switch to a safer seat - though such a move appears unlikely, as campaign materials featuring him are already being pushed through mail slots in Uxbridge and South Ruislip.

Johnson is hopeful that the Dec. 12 election will break the long impasse over Brexit and give his party a majority so he can extricate Britain from the European Union.

Milani arrived in London from Tehran with his mother and sister when he was 5. They lived in public housing. He went to school on partial scholarships.

Johnson, 55, was born in New York. His father was a diplomat, who served in Brussels for a time, and his mother an artist. He was educated at Eton and Oxford. Before entering politics, he was a celebrity journalist.

Judging by one night of door-knocking, it was hard to gauge the excitement locals felt for either candidate. A few firmly but politely told Milani that they were backing Johnson. A few others gladly accepted his campaign fliers and said they were Labour all the way.

But most door knocks went unanswered - even if one could spy folks at home through the curtains. Many brushed the campaigners off, saying they were busy making dinner. One fellow seemed uncertain, but when Milani asked what languages he spoke and the man answered "Farsi," the two struck up a rapport and all were invited in for tea.

Milani declined. But as he was leaving, he noted, "I think we got a vote there."

Far from Uxbridge, Johnson appeared outside his official residence at Downing Street on Wednesday and urged voters, "Come with us, get Brexit done and take this country forward." The dreary alternative - a Labour win or a hung Parliament - would turn "the whole of 2020 [into] a horror show of yet more dither and delay," he warned.

Johnson's jolly pitch was in stark contrast to that of other senior Conservatives who spent Wednesday morning issuing apologies.

In the previous 24 hours, two Conservative lawmakers were accused of disparaging victims of the Grenfell Tower fire, while the Conservative campaign posted a doctored video of Keir Starmer, the Labour spokesman for Brexit, talking to ITV's Piers Morgan.

"Why would the EU give you a good deal if they know you're going to actively campaign against it?" Morgan asked.

In the video, Starmer looks confused and doesn't say anything.

In real life, he did answer the question.

Meanwhile, Johnson himself was criticized for comparing Labour leader Jeremy Corbyn to a murderous Soviet dictator.

In a column for the Daily Telegraph, Johnson compared Corbyn to Joseph Stalin, criticizing Corbyn's tax plan and saying he was targeting billionaires with "a relish and a vindictiveness not seen since Stalin persecuted the kulaks," a reference to the prosperous peasants targeted by the Soviet regime in the early 20th century.

Many said Johnson had gone a little too far, arguing that a higher tax rate couldn't quite be compared to Stalin's atrocities.

In an interview with LBC radio this week, Jacob Rees-Mogg, the leader of the House of Commons, suggested that the 72 victims of the Grenfell fire would have survived had they used "common sense" and ignored the fire brigade's advice to stay inside the building.

Faced with immediate outrage, Rees-Mogg speedily issued an apology, saying, "What I meant to say is that I would have also listened to the fire brigade's advice to stay and wait at the time."

But things went from bad to worse when, hours later, Andrew Bridgen, another member of the Conservative Party, defended Rees-Mogg.

Asked by an interviewer whether Rees-Mogg was in effect saying that "I would not have died because I would have been cleverer than the people who took the fire brigade's advice," Bridgen responded, "We want very clever people running the country, don't we?"

After a new avalanche of criticism, Bridgen himself then apologized "unreservedly."

The two Tories "have caused a huge amount of hurt and pain for the people involved," Cleverly conceded to the BBC on Wednesday morning.

Ahead of the Dec. 12 election, Johnson's Conservatives have a healthy lead in the polls despite accusations of being out of touch. But, as recent events show, anything can happen.

In 2017, then-Prime Minister Theresa May was 20 points ahead in opinion polls and then lost her majority in Parliament.

"Normally election campaigns didn't make that much difference," said Tony Travers, a politics expert at the London School of Economics. "But the last one did."

Election campaigns in Britain are five weeks long - a blip compared with the United States - and over the course of the campaign, Travers said, "there's always a risk for any party that something goes wrong or the public mood changes for some hard-to-understand reason."

If Johnson lost his Uxbridge seat - this hasn't happened to a prime minister in modern times - then he would probably step down, Travers said. The party could try to create a sudden vacancy and stage a one-off election for one seat, "but there's always a risk that the electorate won't like that It's hard to see him getting back into Parliament until there was a naturally occurring by-election."

In theory, Johnson could attempt to run his administration from the House of Lords, but that hasn't happened since the premiership of Robert Gascoyne-Cecil more than a 100 years ago.

IMF’s Georgieva hopes ‘the will holds’ for a Brexit deal

Europe endorses Brexit deal and urges UK MPs to back it

Covid-19 vaccine to be ready for use in 14 days: Russian Minister

$100 billion needed to take vaccine to all: WHO