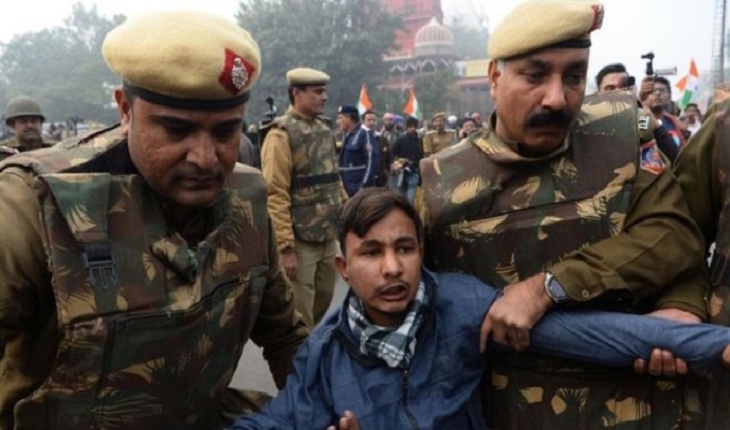 The ban has been imposed in parts of the capital Delhi, Uttar Pradesh state, and some areas of Karnataka state, including Bangalore city.

Protesters are reportedly being detained in many cities as they turned up in defiance of police orders.

The law - known as the Citizenship Amendment Act (CAA) - has sharply divided opinions in India.

The federal government, led by the Hindu nationalist Bharatiya Janata Party (BJP), says it will protect people from persecution, but critics say it's part of a "Hindu nationalist" agenda to marginalise India's more than 200 million Muslims.

The protest ban comes after days of demonstrations across India, some of which turned violent as protesters and police clashed.

The police chief of Uttar Pradesh, OP Singh, has asked people to stay away from protests. The police order, based on a severely restrictive law, prohibits more than four people from gathering in a place. Police say the ban has been imposed to avoid violence.

Police in other places - such as Chennai (formerly Madras) - have denied permission for marches, rallies or any other demonstration.

But the protests appear to be continuing as planned in Uttar Pradesh, Bangalore, Mumbai and Delhi - civil society groups, political parties, students, activists and ordinary citizens have taken to social media platforms such as Instagram and Twitter asking people to turn up and protest peacefully.

Protests of Indian law grow despite efforts to contain them

US, UK warn on travel to India after clashes